Color seems to be on my mind this week. I read a great  article earlier about Harvard’s color library preserving the world’s rare colors and pigments. Today, it SpoonFlower’s recent research delving into America’s color preferences.  There are some expected choices and some surprises. So what are America’s top ten favorite colors?

What’s even more interesting is that the same study, by the custom fabric website Spoonflower.com, not only ranks America’s favorite colors nationally, but it uncovers clear regional differences in color preferences. California and the West, buy black décor most, while the South prefers gray and the rest of America blue.

“Our study reveals America’s true colors,” says Allison Polish, President of Spoonflower.com, which lets customers design, print and sell their own fabric, wallpaper and gift wrap. And they’re not red, white and blue, after all, but blue, black and gray, followed by pink, white and green.

Blue emerges as the top color in 41 states and just over half the cities, while red ranks top in none of either.

Black, however, ranks top in a block of five neighboring Western states (California, Arizona, Nevada, Utah and Wyoming), while gray does so in a swathe of three adjacent Southern states (Arkansas, Mississippi, Oklahoma), plus North Dakota.

The study’s surprise findings for color experts include: the dismal ranking of red, in just seventh place; the high ranking of neutral colors, with black, gray and white all in the national top five; and the popularity of pink, which ranks fourth nationally and is the most bought color in no less than five major U.S. cities. 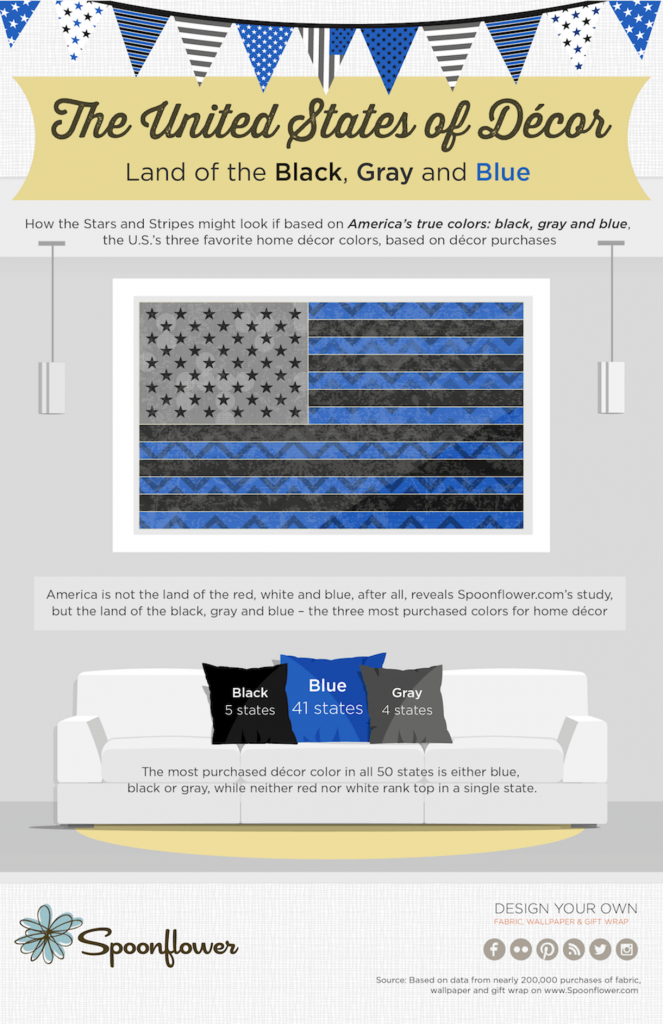 “The popularity of blue doesn’t surprise me,” says Ethel Rompilla, professor of color theory at New York School of Interior Design, and author, with Stefan Steil, of a new online course, on ‘Color for Interiors’. “The reason for the universal popularity of blue, say color theorists, is likely the connection to sky and sea. There’s nothing more uplifting than a clear blue sky on a sunny day.” What does surprise Rompilla is both the low ranking of red and the high ranking of so many neutral colors, like black, gray and white.

Who knew? Pink ranks as high as fourth nationally. “People either love it or hate it. Although times are changing, it still is perceived as a feminine color,” says Rompilla.

None of the three main “warm colors” – red, yellow, orange – rank top in either a single state or city, or are among Spoonflower’s top six colors nationally. They come at a lowly seventh, eighth and ninth respectively in the national rankings. Looks like cool colors have left warm colors in the dust.

The resulting Color Map of America shows the most popular color in every state and 74 cities based on data from nearly 200,000 purchases on Spoonflower over two years.