Tomorrow Cultured opens in the Miami Design District as part of Art Basel/Design Miami, running through December 5th it features a specially curated and richly varied program of events, openings, art exhibitions, and retail promotions. Part of the event, and the one I am sure not going to miss, is The Rug Company’s Alexander McQueen collection.

Taking three years to complete and finished shortly before his death, its the Rug Company’s most opulent collection to date by the late fashion genius Alexander McQueen . Each piece took six to eight months to make by extraordinarily skilled weavers; and like everything the designer touched, some are literally woven with gold.

This is no ordinary ” fashion designer moves into home” collection. The collaboration with Alexander McQueen encapsulates his commitment to arresting design, superior quality and skilled craftsmanship. The intricacy and opulence of the rugs honor the groundbreaking designs for which McQueen has become renowned- giving new meaning to quality, luxury and craftsmanship. In fact, the craftsmanship is integral to the collection – without the traditional handmade methods , they would not have been able to achieve the designs. The man was a GENIUS. 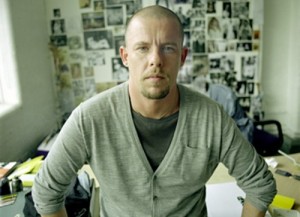 The dramatic Military Brocade design, originally created as embroidery for a coat from his  2001 collection, reveals McQueen’s ability to innovate while honoring history. The pattern is inspired by the effect of gold bullion found on traditional military uniforms. The design incorporates wreath and fern silhouettes and gold fringing, against a black background, with the extraordinary addition of a curled oriental serpent wrapped in oak leaves, appearing from a skull centred in the design. Raised from the wool background, the golden silk yarns are carefully carved by hand to achieve the complexity and fine detail of the pattern. 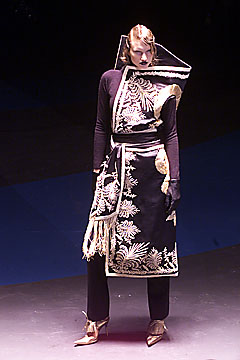 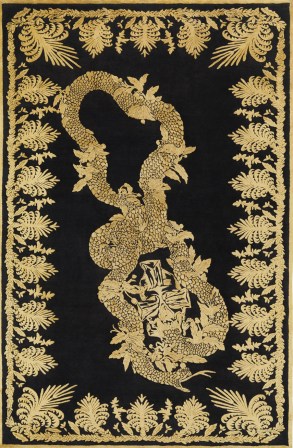 Feathers, the iconic Alexander McQueen pattern, is taken from the breast and wing feathers of a hawk and reflects Alexander McQueen’s lifelong love of birds and patterns found in nature. The design was developed into subtle grey tones and hand knotted in fine cashmere yarns mimicing the softness and lightness of the feathers. 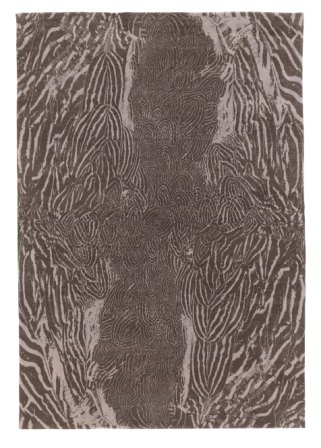 Instantly recognizable, the skull motif has been translated into an exquisite tonal rug and two cushions. The understated shades of grey soften pattern and the lustre of the silk yarn enables the skulls to stand out against the wool background. The skull pattern is also depicted on two hand woven tapestry cushions: one in black and white, and the other in opulent golden metallic thread. 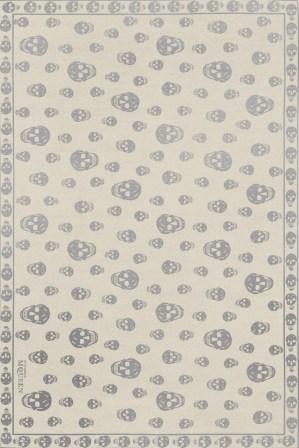 Hummingbird,for me the most stunning of the collection, is a finely hand woven wool, silk, and metallic flatweave rug that celebrates the delicacy of the motif. The birds are captured in flight to show their unique speed against a dark background to offset the  iridescent colors in their feathers. I can’t imagine that this is a handknotted rug not a photograph. If the rugs aren’t in your price range- He has done pillows in Hummingbird and skulls 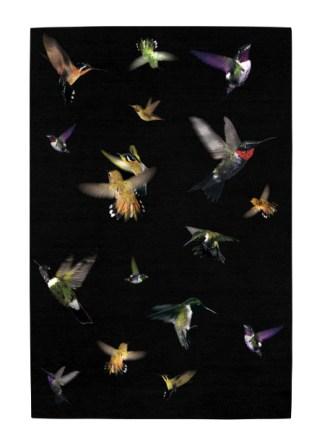