The Look of Love: The Lover’s Eye 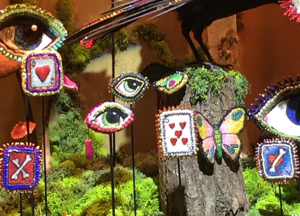 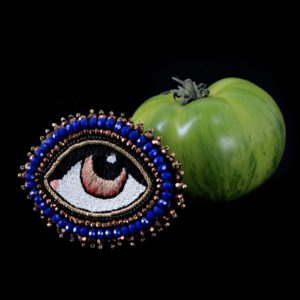 Walking the halls of M&O last month, I spotted Celeste Mogador , an embroidery artist that participated in last September’s trend presentation, House of Games.  Her work- embroidery on silk-  is unique with a surreal whimsy (make sense?). Her pieces range from  playing cards that seem straight out of Alice in Wonderland to tarots and badges; love notes and stamps, but what intrigued me were the eyes. That’s where I learned that her inspiration came from the lover’s eye – love tokens so clandestine that even now it is almost impossible to identify their recipients or the people they depict. I had to find out more.

In the 18th century, portrait miniatures mounted in brooches, lockets and pendants were popular fashion accessories. As we moved toward the new century, these jewelry items morphed into the “eye brooch” or lover’s eye. – a miniature portrait of the eye of a loved one that was a popular gift to your true love.  They were normally done as watercolor on ivory, depicting the eye or eyes only of a spouse or lover so his/her identity wasn’t revealed . Right out of a romance novel, right? 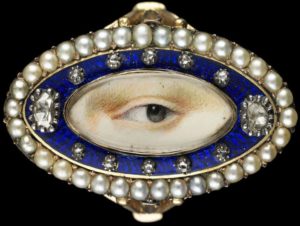 The obsession for Lover’s Eyes – and it was a craze- thanks to the Prince Regent, later King George IV, who was said to have exchanged lovers’ eyes with his wife and probably with his lover flourished for only a short time. But this is a story made for romantics. 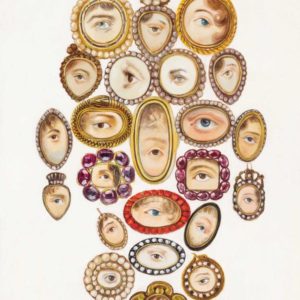 According to lore, the story of lover’s eyes begins when the Prince of Wales became smitten with a twice-widowed Catholic woman named Maria Fitzherbert. He courted her rather unsuccessfully at first, but he kept at it- trying to win her affection and profess his undying love to her. (Supposedly she wasn’t really going to have any of it.). Finally, he staged a kind of half-hearted suicide attempt and she reluctantly agreed to marry him. But shortly thereafter, she came to her senses and realized what exactly she had done by consenting to marry the prince of Wales. 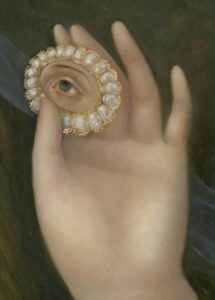 So Fitzherbert fled to the Continent, trying to escape George’s attention, but he didn’t give up. On Nov. 3, 1785, the prince wrote to Mrs. Fitzherbert with a second proposal of marriage. Instead of sending an engagement ring, he sent her a picture of his own eye, set in a locket, painted by the miniaturist Richard Cosway, one of the celebrated artists of the day. This gesture and the romance that went with it was frowned upon by the court, so he had employed a miniaturist to paint only the eye to preserve his anonymity. The couple went through a form of marriage on 15 December 1785, though all present knew the marriage was invalid Reportedly, Maria’s eye miniature was worn by George IV, hidden under his lapel. This is regarded as the event which led to lovers’ eyes becoming fashionable. 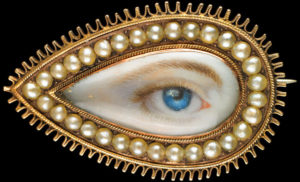 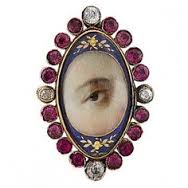 Fast forward to Queen Victoria, George’s niece, who was said to be fond of them and famously revived eye miniatures for use as presentation pieces. Both the queen and her consort were accomplished artists, as well as great collectors. The couple commissioned love tokens from jewelers and loved to exchange and expected gifts at every wedding anniversary, birthday and Christmas. It’s only natural to assume she exchange lover’s eyes with the love of her life- Albert.  Sir William Charles Ross was the Royal Miniaturist to the Queen and painted most of the eye portraits commissioned by her majesty.

The art form was kept modestly alive through the the early part of the twentieth century by a few devoted followers of the style, mostly members of the royal family or the aristocracy. At their most popular, the pieces were referred to as “eye miniatures”. Today we call them lover’s eyes, a term coined by jeweler Edith Weber. 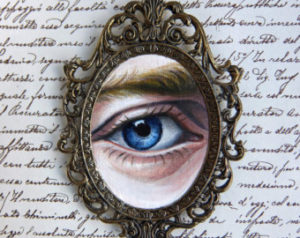 Eye miniatures also evolved into a form of memorial jewelry sometimes referred to as ‘tear jewelry.’ The purpose of the eye portrait was refocused from secret love to remembrance. Decorated with a tear or depicted as gazing through clouds, the miniatures evoked powerful sentiment. The symbolism of the gemstones used to surround the portrait added to the sentiment. Pearls often represented tears when they surrounded an eye portrait. Diamonds represented strength and longevity. Coral is said to protect the wearer from harm.Garnets represented true friendship. 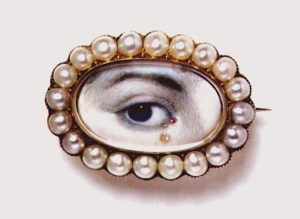 With an estimated fewer than 1,000 Lover’s Eyes surviving and because of the secrecy surrounding them, we’ll never know who they are, the artists who painted them; nor for whom they were intended. 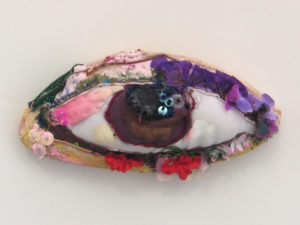 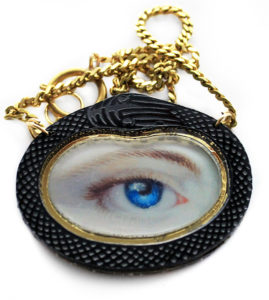 Today, lover’s eyes are reincarnated by artisans in a variety of mediums. Looking for a Valentine’s Day gift for your dream love ? A quick google search will find some great handcrafted options.