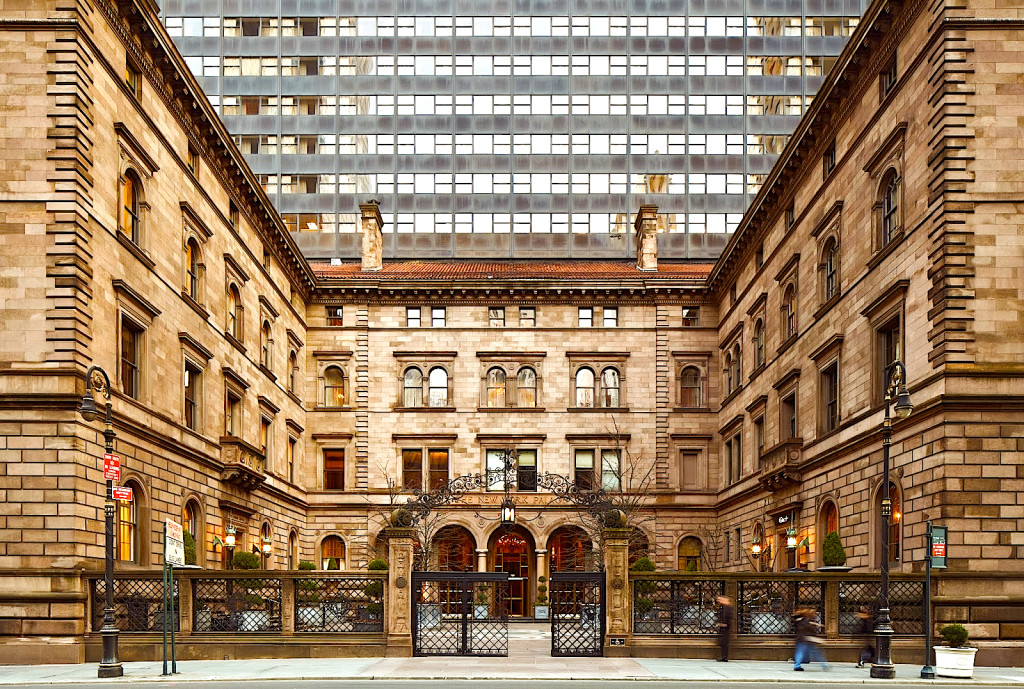 I love showhouses.  As a participant they are a grind, but as a visitor I always walk away with some bit of inspiration or a new idea or way to do something. Isn’t that why we go?   My thing is window treatments, so I am the one peeking behind the panel to see how it was hung or lifting up a hem to check out construction.  This year Kips Bay did not disappoint when it came to window fashion inspiration. I was really happy to see more going on at the windows than a pair of stationery panels hung from a rod and rings. been there done that– way too many times.

So is the layering I saw  a signal that windows will play a bigger role when  designing a room in the coming months? Let’s hope so!

This year’s Kips Bay Decorator Show House made an unprecedented venue shift as it took over Manhattan’s quintessential mansion at 457 Madison Avenue, The Mansion on Madison. Situated in the heart of Manhattan, the famed building which was originally the north wing of the famous Villard House, is connected by a grand courtyard to adjacent luxury hotel, The New York Palace and steps from St. Patrick’s Cathedral.

Designed and built by architecture firm McKim, Mead & White in 1884, the Renaissance-inspired Villard Houses were constructed by Henry Villard, President of the Northern Pacific Railway, to serve as six private yet connected brownstones. Renovated in 2011, the six-story and 26,190 square-foot Mansion on Madison boasts a grand staircase, landmarked hallways with marble floors, 16-foot high ceilings with elegant moldings, multiple Italian marble fireplaces, and a carved paneled room with barrel-vaulted ceilings. Here are my favorite inspirational installations at Kips Bay: 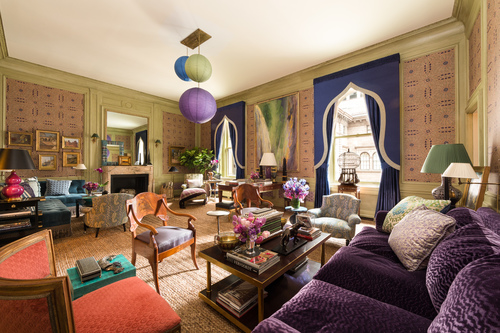 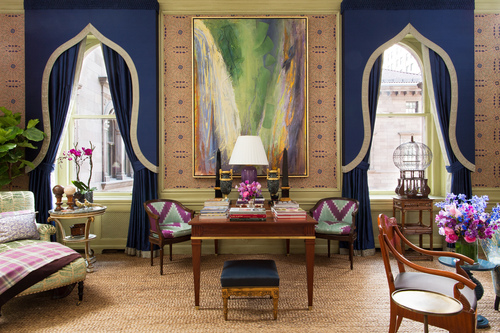 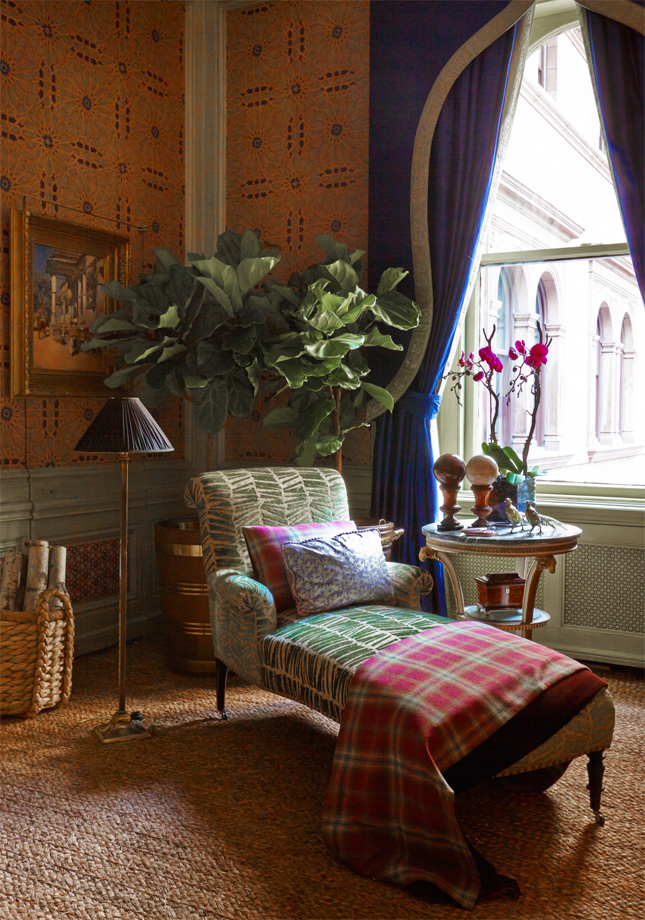 Moroccan  inspired cornices over panels frame the arch windows of the room. Contrast woven metallic jacquard banding edges both the drapery leading edges and hems and the cornice. The scale is masterful of the cornice making the window become a focal point in this room.

What you might have missed is the smocking tape pelmet at the top of each cornice. 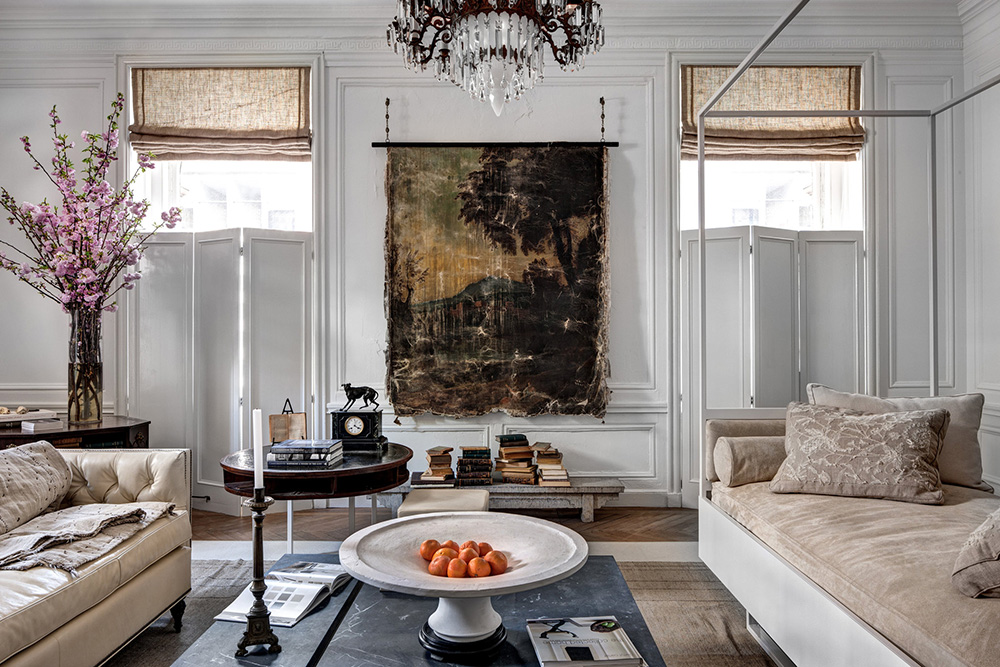 Carter was inspired by the collected home concept and used it as a starting point to build a wonderfully layered room. I love the canvas between the windows and his take on “combination treatments” mixing paneled shutters and linen Roman shades with banding on the sides. 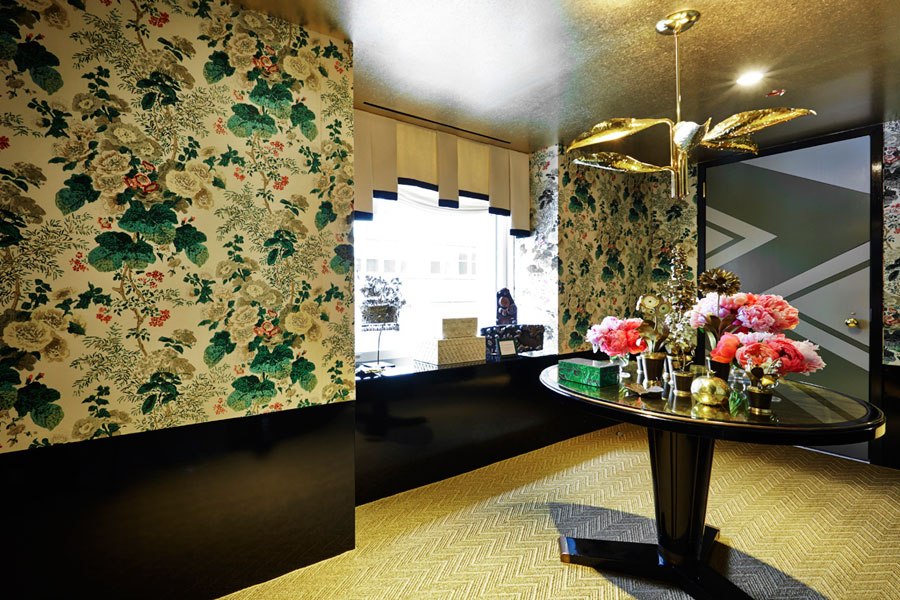 Young Huh transformed a freight area into a ladies and gentleman’s powder rooms. The wall covering is hand blocked fabric . ( See two of the blocks used to print the fabric on the window sill.) The wainscoting in patent leather. With a lot going on, Huh kept the window treatment simple; it feels like a kimono to me with draped pelmets banded at the hem for definition. 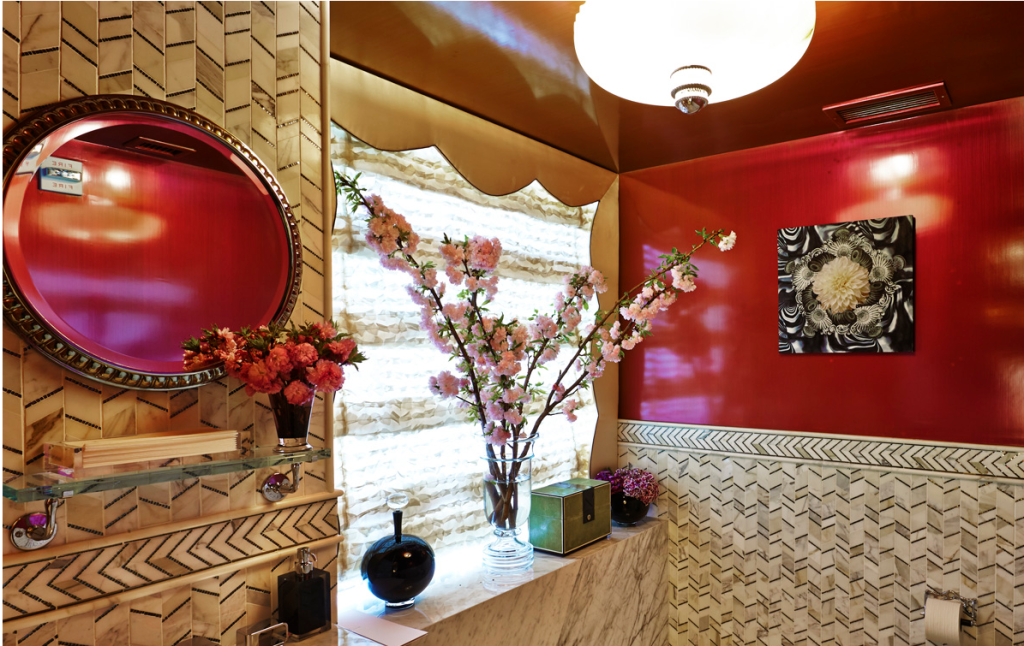 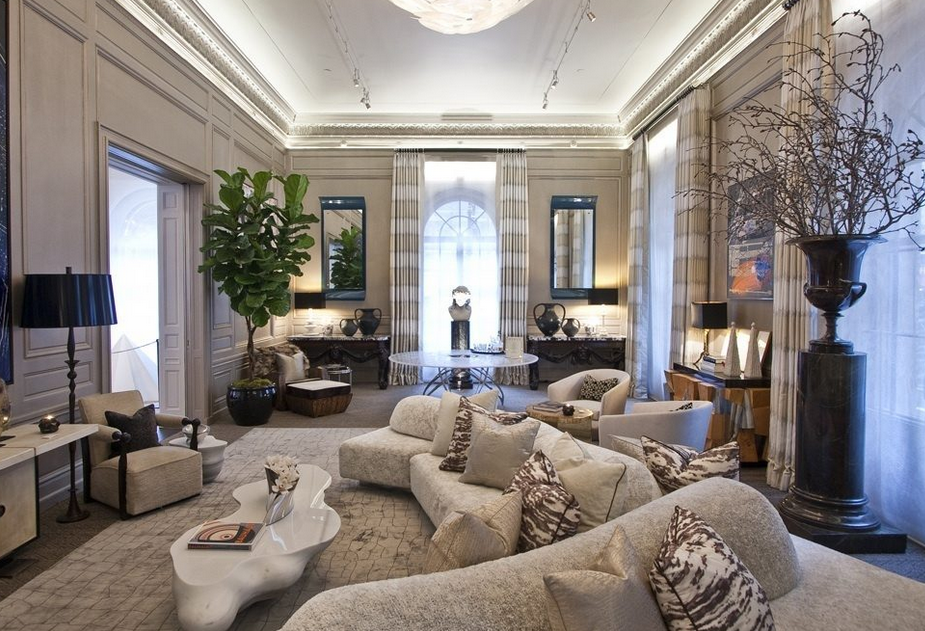 First off – gorgeous Palladian windows. Second- I love the twist on traditional sheers and panels by using flat scrim panels with weighted hem bars. I love the contemporary mood it sets and how the light filters through shadowing the window architecture. 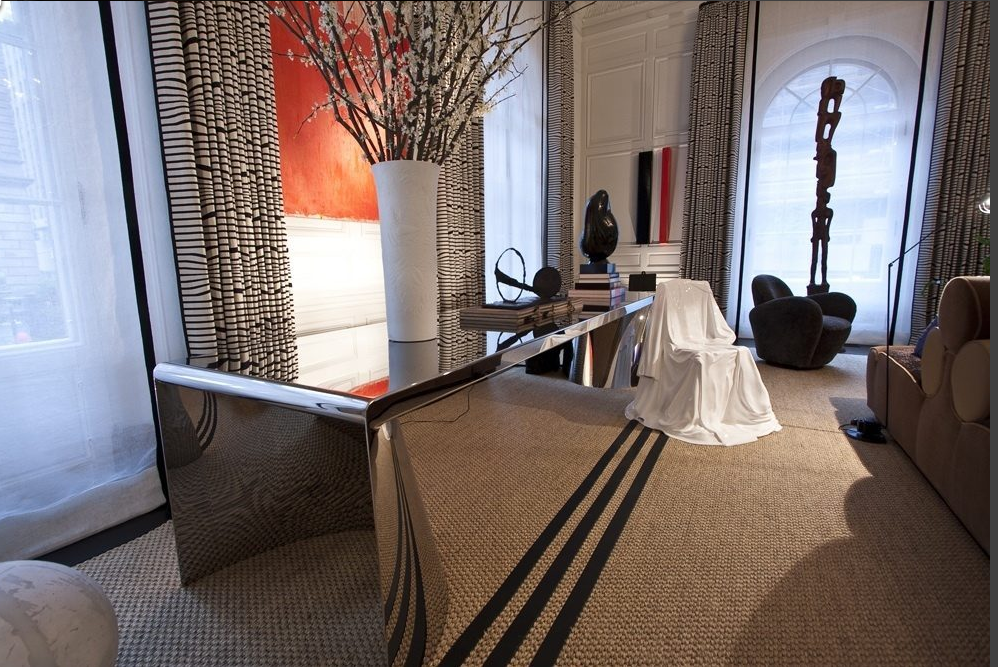 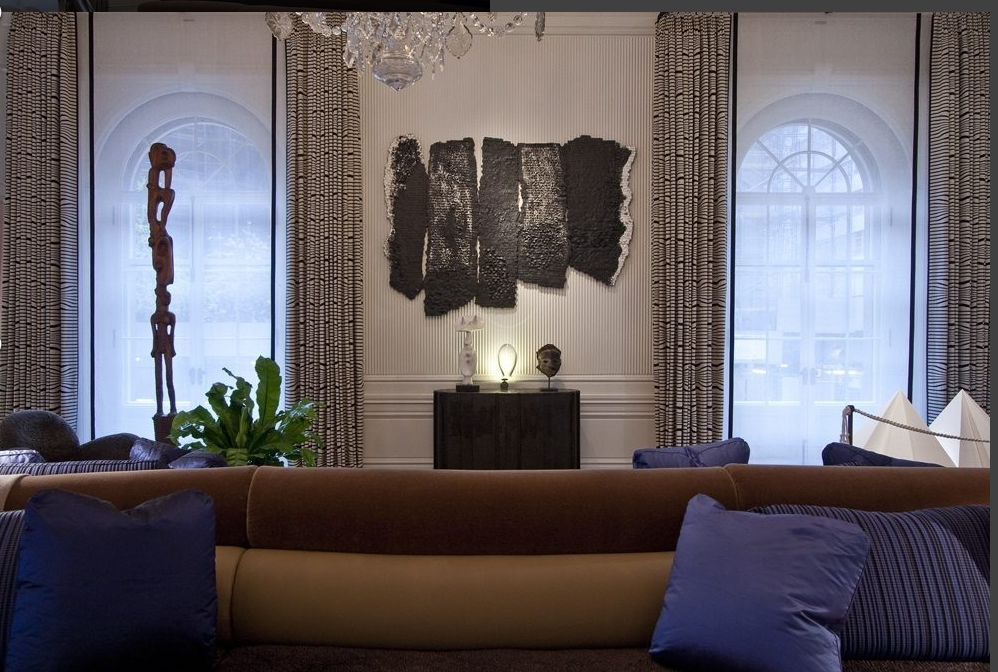 Same windows and this time similar look , but Montoya turns the scrim into a flat Roman and  adds inset banding on  each side in black. 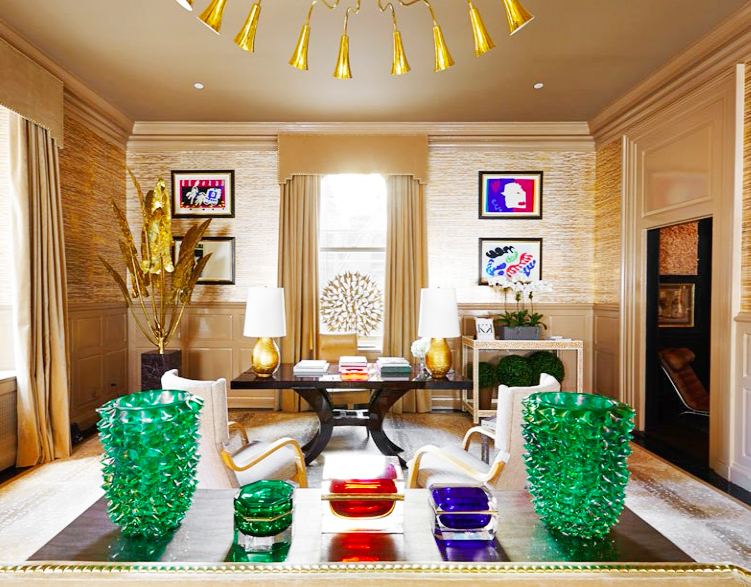 Kristen Kelli are know for their love of gold mixed with pops of bold color. These geometric stepped cornices are edged on all four sides in gold nailheads accenting the metallic grasscloth wallcovering . 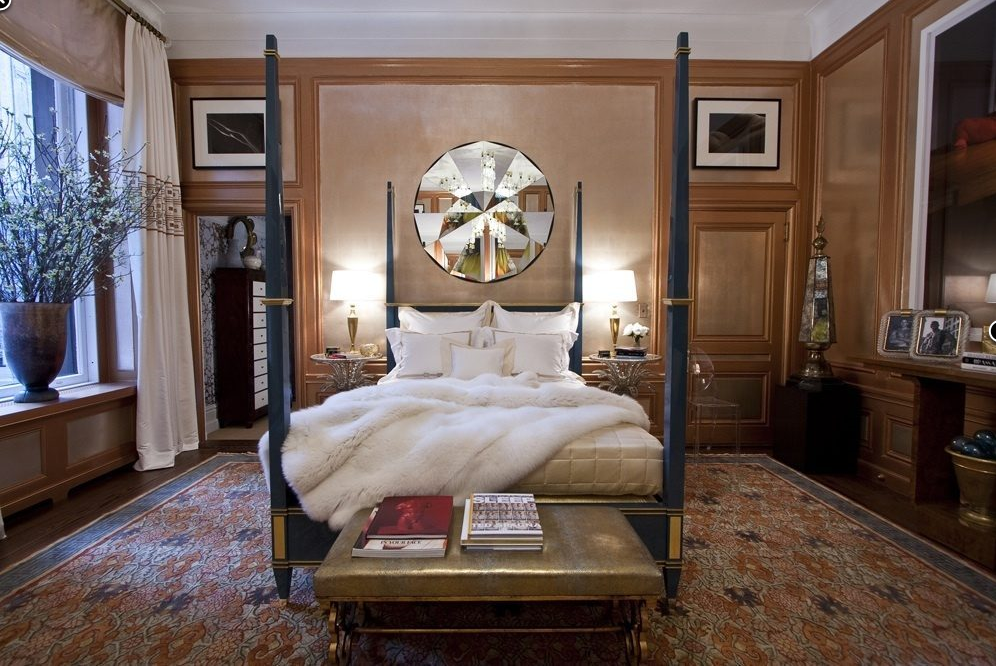 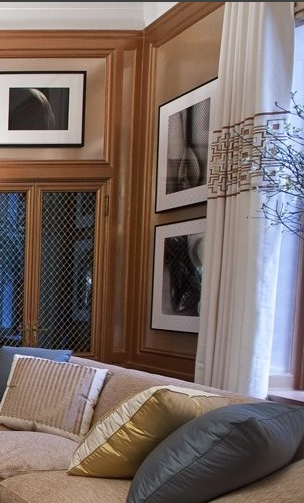 Love the appliqued band on these panels in Cullman  and Kravis’ bedroom. 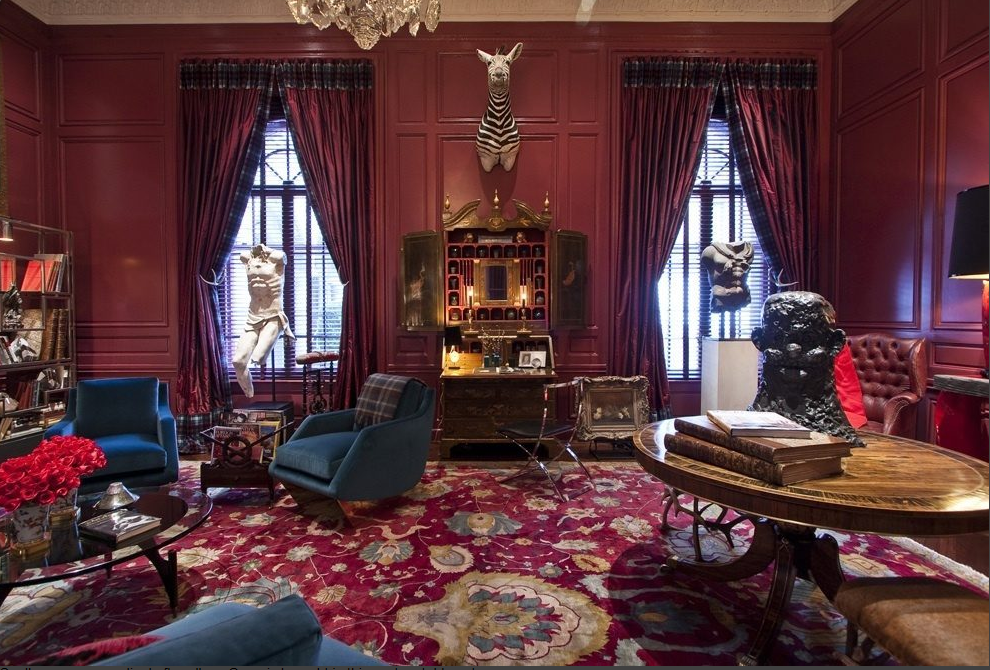 With Saint Patrick’s Cathedral across the street and the windows overlooking it; Gregoris took inspiration from late Cardinal Spellman. As his rep, Sara Farevaag, noted, Spellman was “a supporter of Richard Nixon, Joseph McCarthy, and Broadway choir boys,” so the ultra dark and sumptuous reds (“claret, burgundy, cerise, Chinese and blood reds” are all here) ring with an almost disturbing opulence. 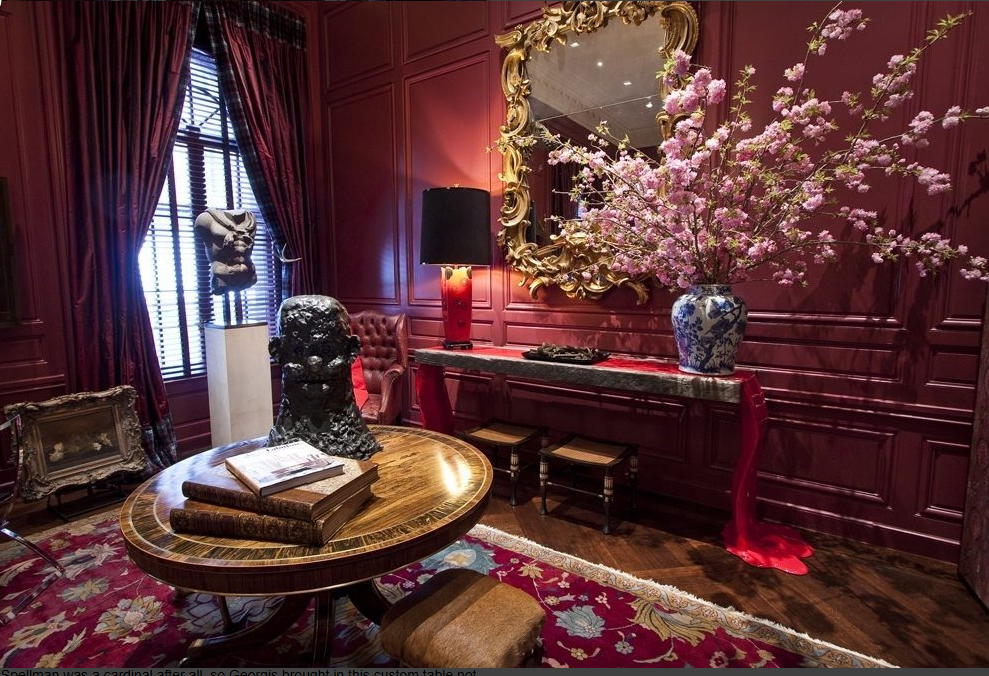 Almost an after thought , because there is a lot going on in this room- the draperies are red silk with large bands on the hems and leading edges in Royal Stewart tartan. The taped headings are also faced with the tartan and the treatment is held back with antlers. 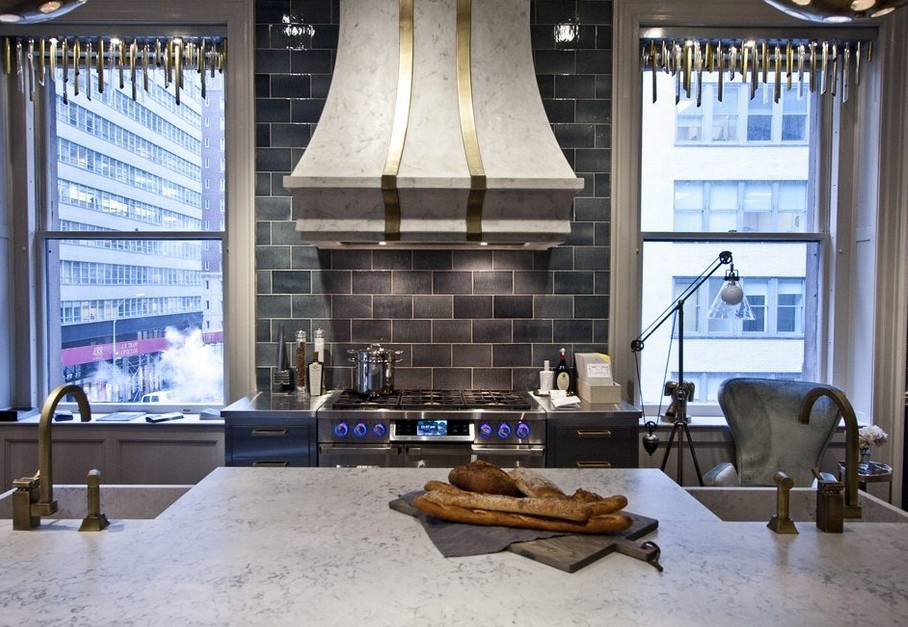 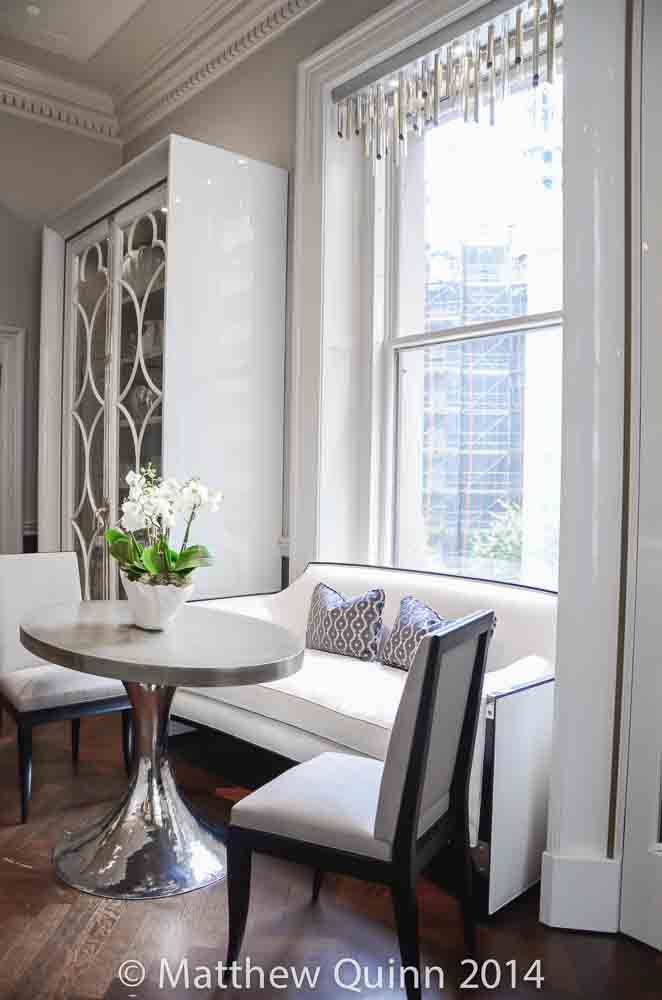 Last but not least,  I LOVE these valances inspired by St. Pat’s and made from pipe organs.  They are mounted into sheet metal frames and inside mounted. Genius!