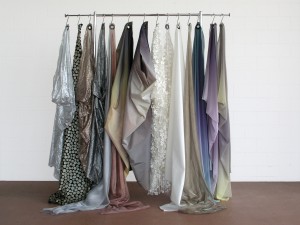 One of the highlights for me at Paris Deco Off was Jacob Schlaepfer. For me, Jakob Schlaepfer epitomizes the best of both design worlds. They call their textiles “industrially hand crafted “and it is so true- innovative, ingenious design done by the hand of master artisans. Known as the purveyor of haute couture fabrics since 1904 to such fashion houses as Alexander McQueen, Marc Jacobs, Vivenne Westood and Christian Lacroix (That is a whole other story!),  They entered into interiors in 2008 with couture worthy textiles that… well; you have to see it to believe it!

I was honored to be invited to experience their 2010 decor line at Galerie Alain  Blondel in the Marias and they did not disappoint. 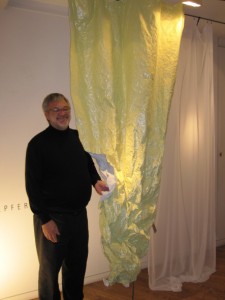 Artisitc Director Michele Rondelli and Creative Director, Martin Leuthold led us on a mouth watering tour of their third edition interior collection. Each new piece was better than the last. This collection was meant to be experienced by all the senses. 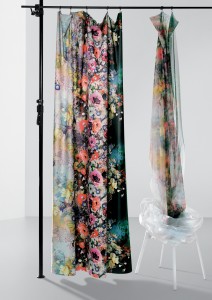 In 2008 they introduced a world first in by Vada Pleats and Vada Giardino. Never before has printing been carried out on three layers of tulle simultaneously. The effect is as beautiful as it is striking, since the three layers give the fabric a 3D look. The collection is supplemented with the flame-retardant Buonanotte fabric for black out draperies, which can be printed with all the motifs in the collection. 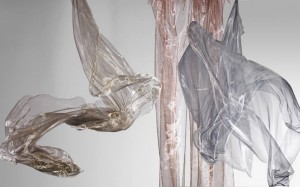 Phantom – the world’s lightest textile for windows needs to be thrown up in the air to see how it float swirls around you like smoke rings. Weighing only 10 grams per square meter, this polyester fiber enhanced with metal floats with every movement of the air. Introduced in 2009 and winning several prestigious textile design prizes; they built on its success with a printed version- Secret Garden. 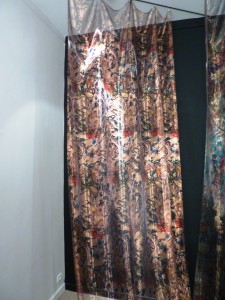 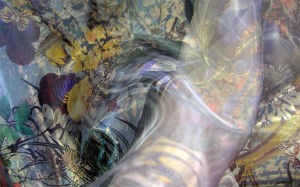 “The technical perfection of the material, which shows most spectacularly in movement, has here been made entirely subservient to the poetic effect achieved,” commented one member of the Textile Design Jury. 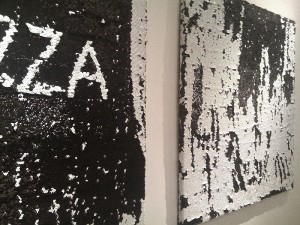 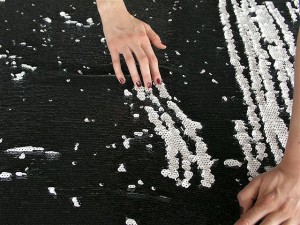 Pollock must be played with. This textile is like a incredibly beautiful etch-a sketch. Invention is in Jakob Schlaepfer’s blood: it has been  more than thirty years since the St Gallen manufacturer developed the first industrial procedure for applying paillettes(sequins) to fabrics, revolutionizing the entire textile industry. Now a new process has made these same paillettes interactive: by stroking them you can turn them over, from one face to the other, from one colour combination to another,from bright to matt, from plain to printed, from glittering to iridescent – with more than 200 combinations the possibilities are simply endless.  Jean Paul Gaultier, Vivienne Westwood and Marc Jacobs, were so enthralled they included the fabric in their new collections just off the runway. 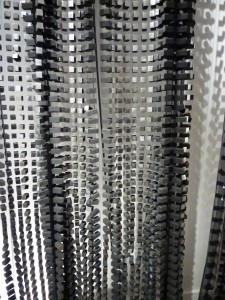 Korsakow is …how do you explain Korsakow-? It is embossed foam tipped with gold or silver leather and applied by hand to transparent black tulle).See what I mean you just have to see it to believe it! 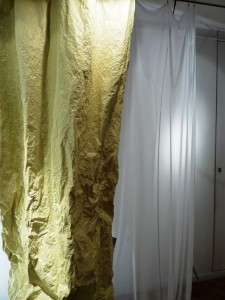 A layer of aluminum is sandwiched between contrasting chiffons in this sculputural curtain.