If you know me, you know I am a huge Francophile; so it’s no surprise that I am a little obsessed with toiles- those classic illustrative patterns that record events, offer cultural imagery or tell stories of idyllic times; reminding us of past extraordinary industrial, human and artistic adventures. For me, that’s the draw- I love the design narrative and imagining what might have been on the artist’s mind as he or she picked up a pen and sketched the beginnings of the illustrations.  What was this design all about? Was the artist the participant or observer?

On last month’s Paris Décor Tour, we had the pleasure of meeting with Pierre Frey and he told us about the impending celebration of Oberkampf’s death- the genius behind the Toile de Jouy I love so much- and their part in it…. 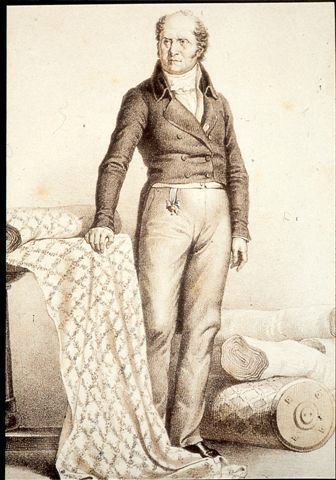 This month is the 200th anniversary of Oberkampf’s death. On October 4, 1815 Christophe-Philippe Oberkampf died at the age of 77. Arriving in France at 18 hoping to find work as a skilled textile printer, the timing was perfect for Oberkampf. The 70 year ban on cotton was about to be lifted. With the embargo gone, Oberkaampf built up the factory at Jouy en Josas; becoming the largest producer of printed cottons in Europe. 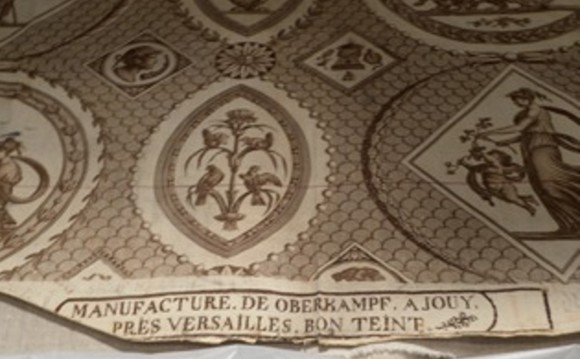 Factory mark on a toile from Pierre Frey archives

Toiles stand as a symbol of French ingenuity and style. When the French government outlawed wearing or using of printed cottons to protect its wool/silk trade; it eliminated print houses. Oberkampf’s factory revitalized the French cotton and printing industry. Piece of toile trivia- The location of the factory on the road to Versailles might not have been accidental as the court became enamored with his printed textiles. 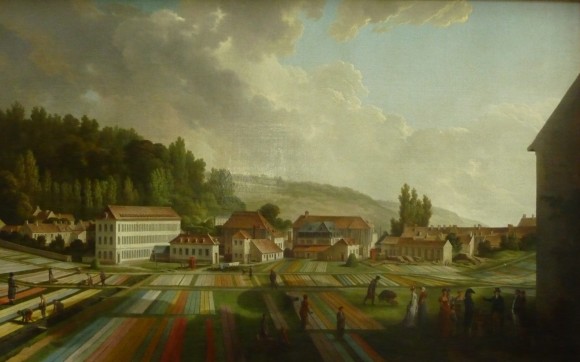 Pierre Frey is connected to Oberkampf because the factory and documents were purchased by Braquenie, which was subsequently purchased by Pierre Frey; so now those famous prints are in their archives. (Which I have visited many times; always lingering on the famous printed textiles.) The Toile de Jouy museum came to Pierre Frey and asked them to collaborate with French artist Herve Matejewski, to take one of the famous toiles and give it a modern twist. Hervé Matejewski is no stranger to tweaking design classics. He took one of the most famous toiles de Jouy, a pastoral scene called Les Buveurs, and colored certain motifs in the repeat with fluorescent inks. The creative director of Pierre Frey liked the recolored pattern so much, he decided to put it in the line. The problem was finding light-stable fluorescent inks that met the high standards of the company, but after many weeks of experimentation, a solution was found and the recolored fabric will be available sometime later this month. 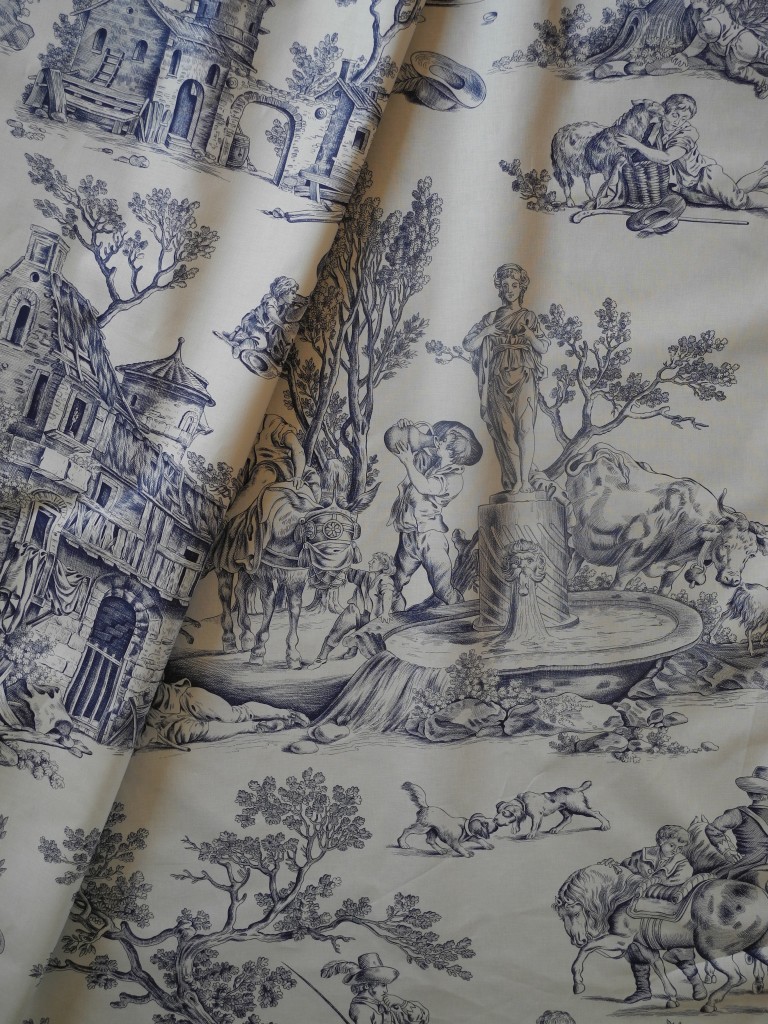 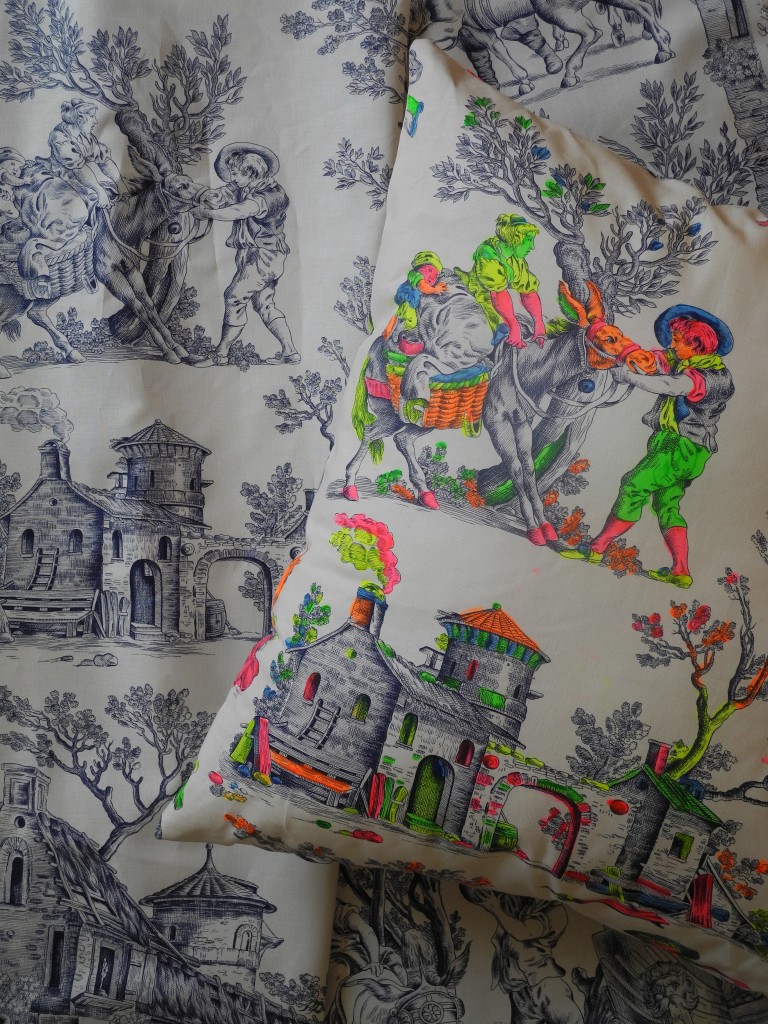 The patisserie Lenotre then took those images and decorated their pastries with a special collection that will be for sale until the bicentennial. Three designs on white chocolate discs and filled with raspberries, apricot and 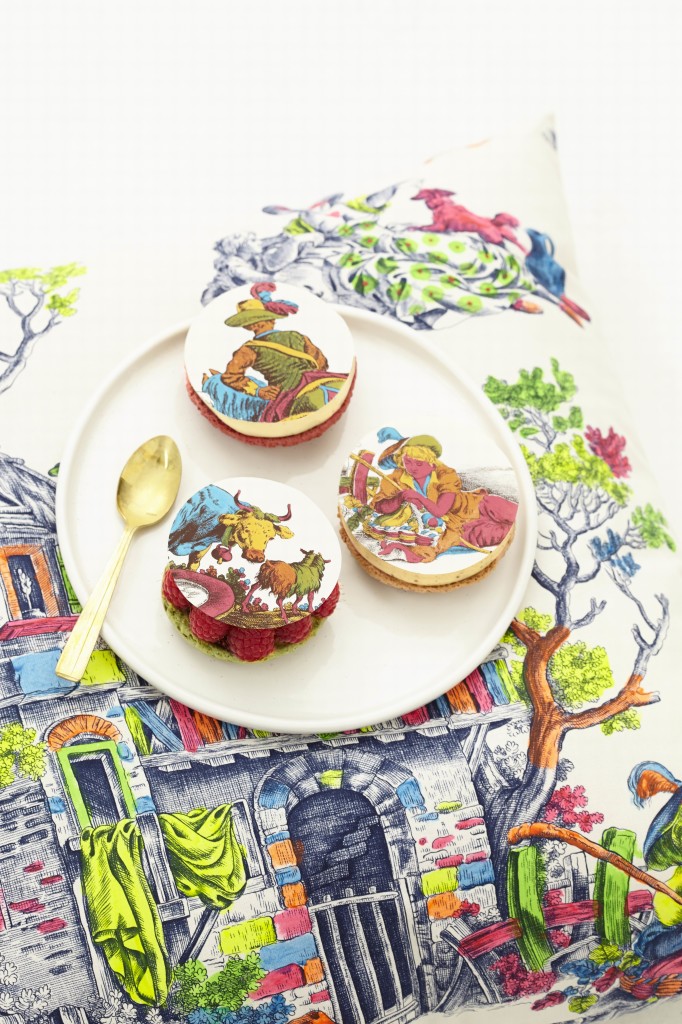 I think designers identify with Oberkamp’s patterns and printed textiles in part because we recognize he was a consummate design entrepreneur. Throughout his career, he innovated and created. His first printing workshop was founded in 1760, growing to a large scale factory. His dream was to build a fully integrated operation from cotton spinning through to printing, but unfortunately it never came to fruition. Early on, Oberkampf developed a method for organizing the generations of new patterns in the in the factory’s design studio. He also employed painters and artists on one-off commissions to stimulate innovation in design. His incredible creativity is owed to his training as a draftsman and engraver, and for his knack for choosing talented employees and collaborators. But most of all, like creatives today, he was on a never-ending search for novelty always anticipating the newest in fashion and trends. 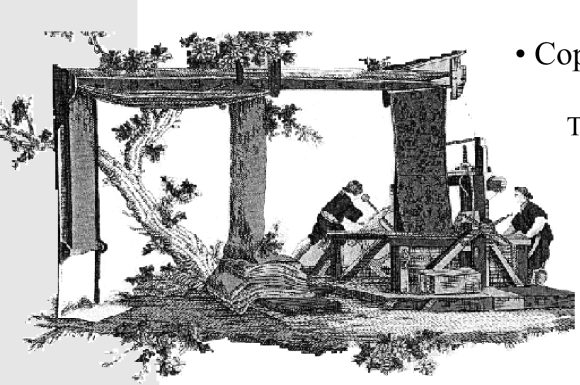 By the beginning of the 19th century, the factory was at the cutting edge in applied chemistry (dyeing and bleaching with chlorine) and in the mechanization of the printing process with Oberkampf’s introduction of copper-plate printing, invented in England. After Oberkampf’s death and the sale of the factory in 1821. Oberkamp’s vision continued with industrial developments in other areas of France through the 19th century. But no other brand was or still is as well-known or carries the provenance that Oberkampf’s did. Oberkampf and his toiles are synonymous with printed textiles. They have been reinvented again and again and are still considered a premier textile.

Next up- The Backstory on Toile