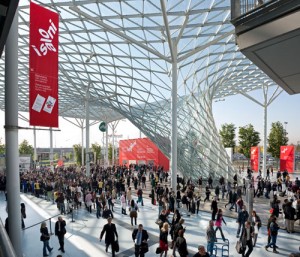 Most of the design world will be traveling this week- either to High Point or Milan.

Milan Design Week  held April 17th -22nd is THE place to visit for engaging exhibitions, innovation, surprise and around every corner- delight. i saloni is the benchmark. In it’s 51st year it’s at the Rho fairgrounds expecting 280,000 + visitors. 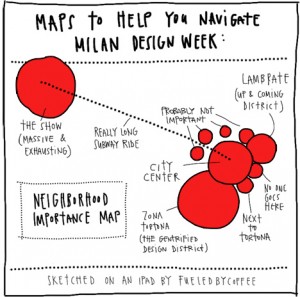 Part of i saloni, SaloneSatellite was the first event to focus on young design talent and has become the quintessential meeting place for manufacturers, talent scouts and the most promising young designers. This year’s theme , Design<->Technology, is in honor of Steve Jobs – as the press says because he “taught us to dream and to believe in the possibilities of technology and creativity.” 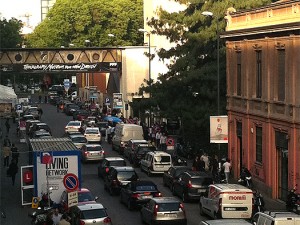 But the real action is in Milan center and its neighborhoods. From the posh luxury brand stores on Via MonteNapoleon to Zona Tortona and Lambrate the show is a patch work of lofts, storefronts, warehouses, galleries. Milan Design Week  invented the “pop-up”. On my first visit- I was handed a map, put in a cab and sent on my way. I was exhilarated and panic stricken at the same time.  I guess that’s why my memories are still crystal clear. 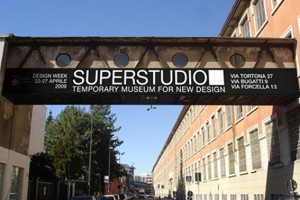 You can’t feel alone, because the crowds are crazy and I mean 24/7! I am always struck by the numbers of general public attending– families with strollers and young kids visiting exhibits and talking design . You don’t see that everyday in the U.S. 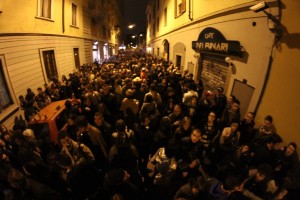 But enough of my walk down memory lane. Here’s a sneak peek of what Milan Design Week 2012 will have to offer: 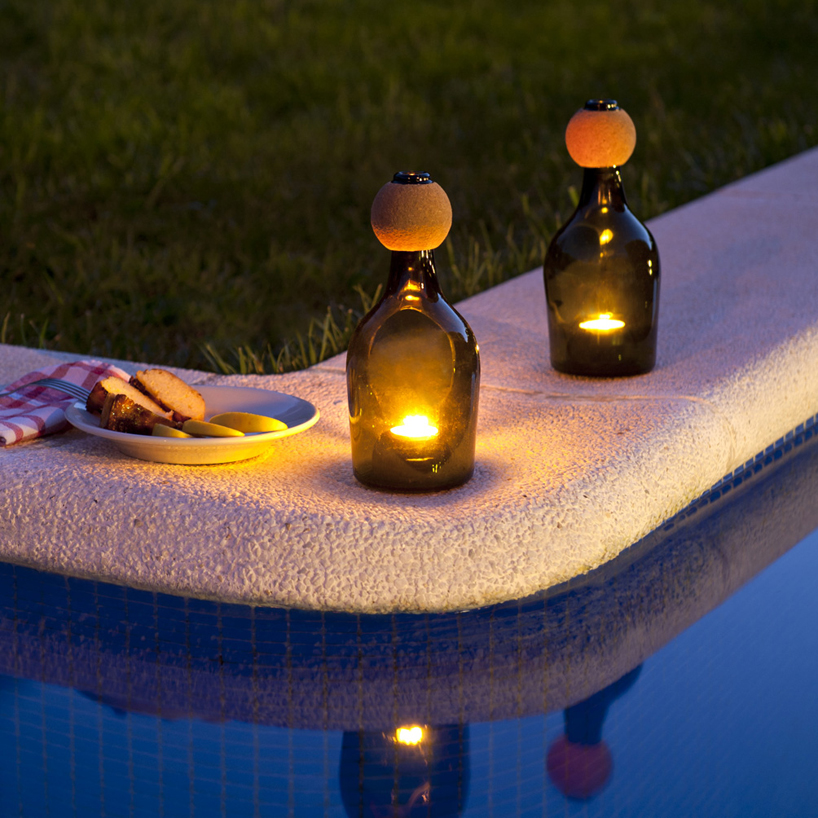 Nino by Lucia Bruni via Designboom

nino is a recycled and recyclable candle lantern, perfect for both interior and exterior settings made from a  Italian ‘prosecco’ bottle.

The prototype chair is equipped with industrial sensors connected to a central server, alongside visualization displays. As an individual sits in the chair, information about the flow of forces from his or her weight is depicted onscreen and available to the person by e-mail as a personal, shareable video. the data will also be used by AUDI in optimization efforts to streamline the chair’s construction. 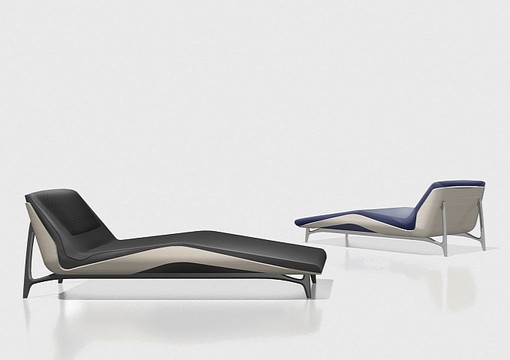 Mercedes Benz has teamed up with the Italian Formitalia Luxury Group, to launch a new collection into the furniture market, bringing Mercedes-designed chairs and tables to your living room under the Mercedes-Benz Style label. 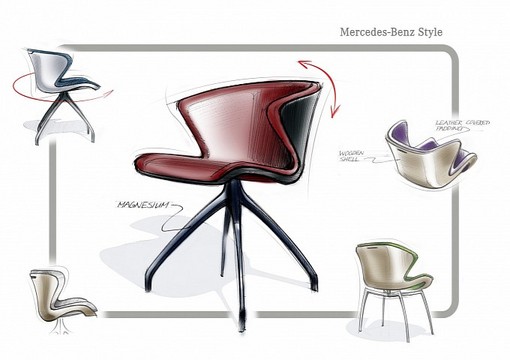 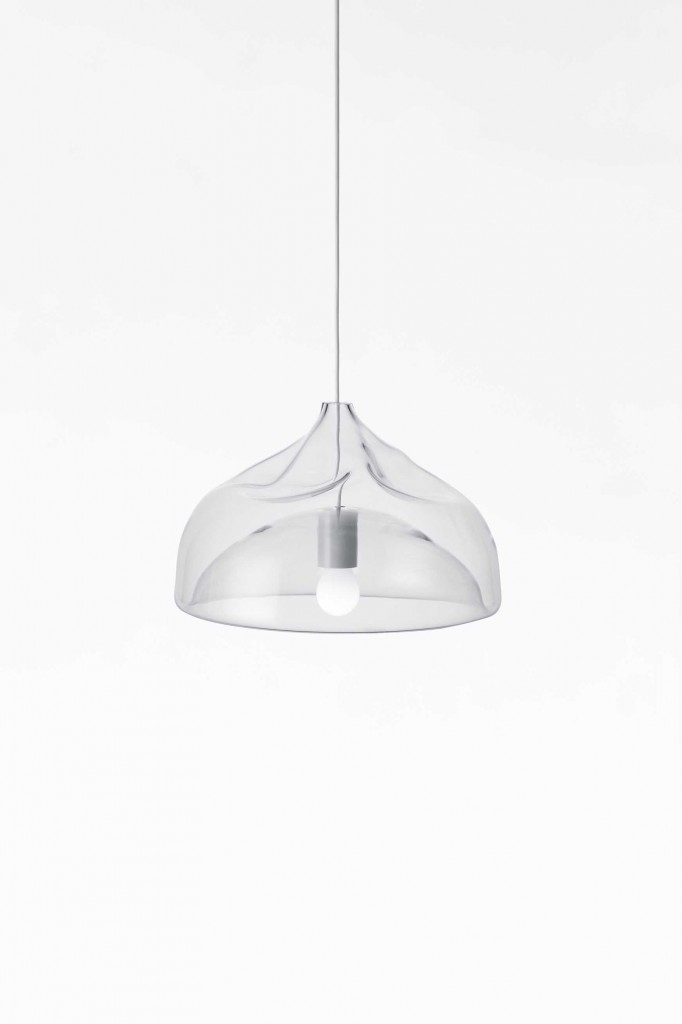 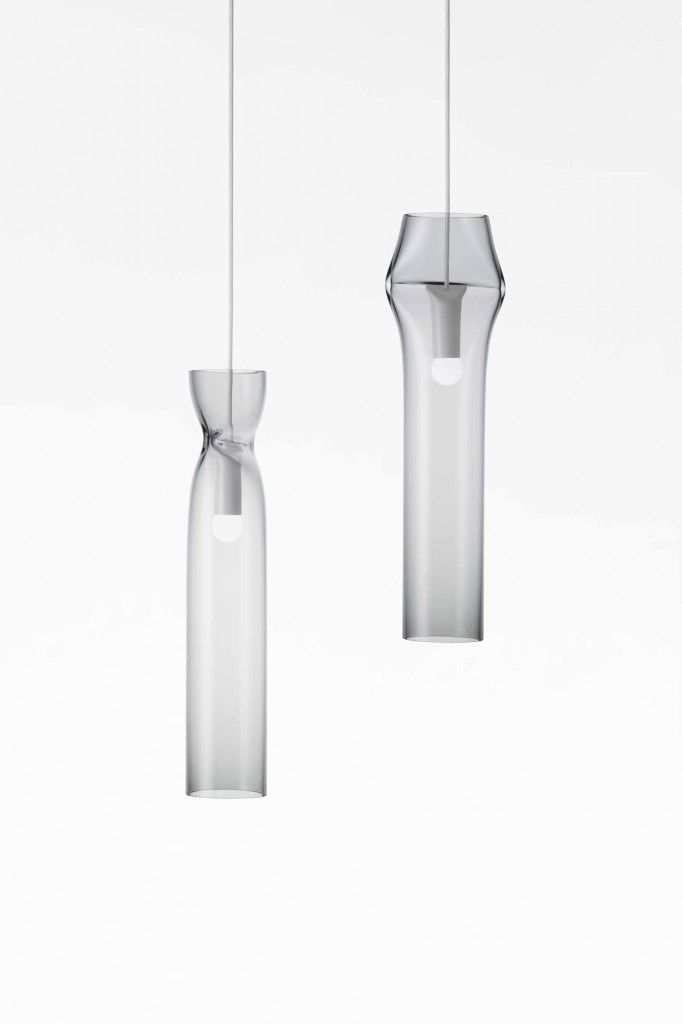 New Meaning to the Kitchen: 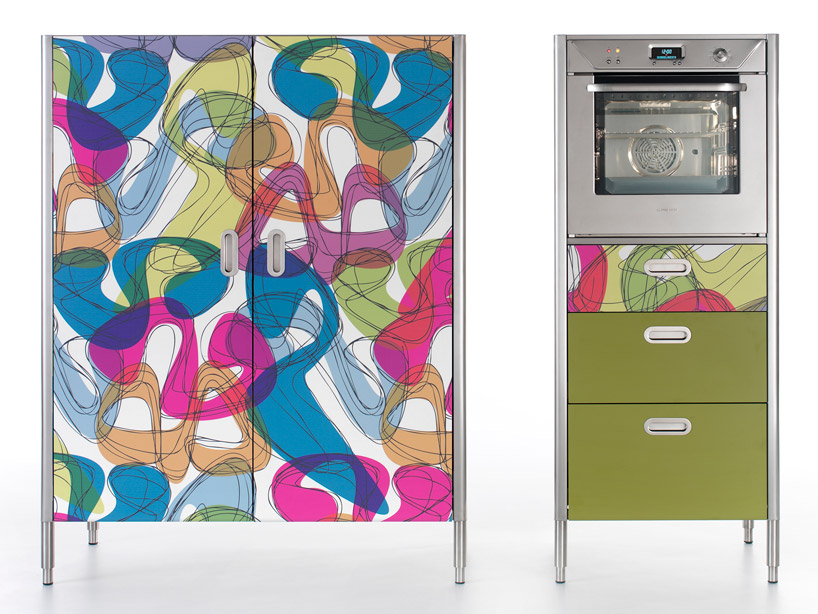 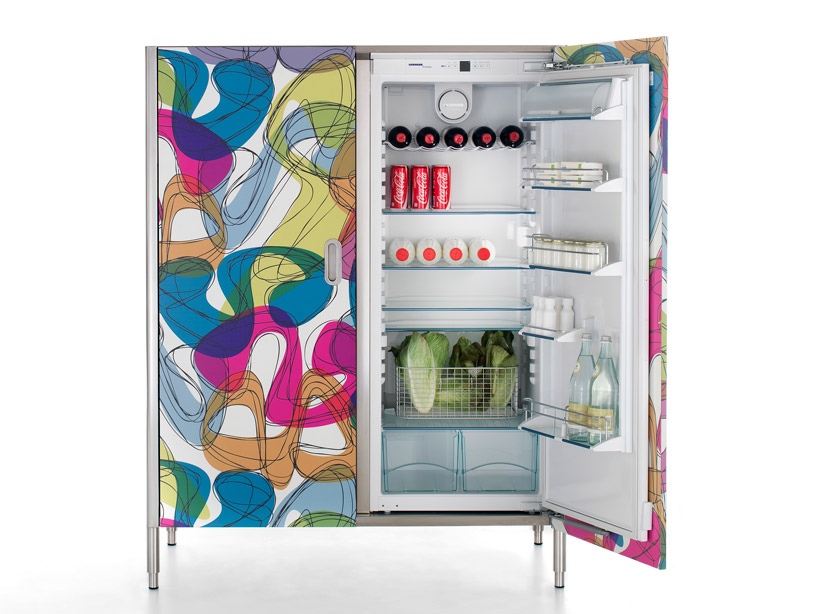 Italian company Alpes Inox has integrated furniture and appliances in their new line of  freestanding cabinets. The fridge and raised oven are hidden behind the cabinet doors. 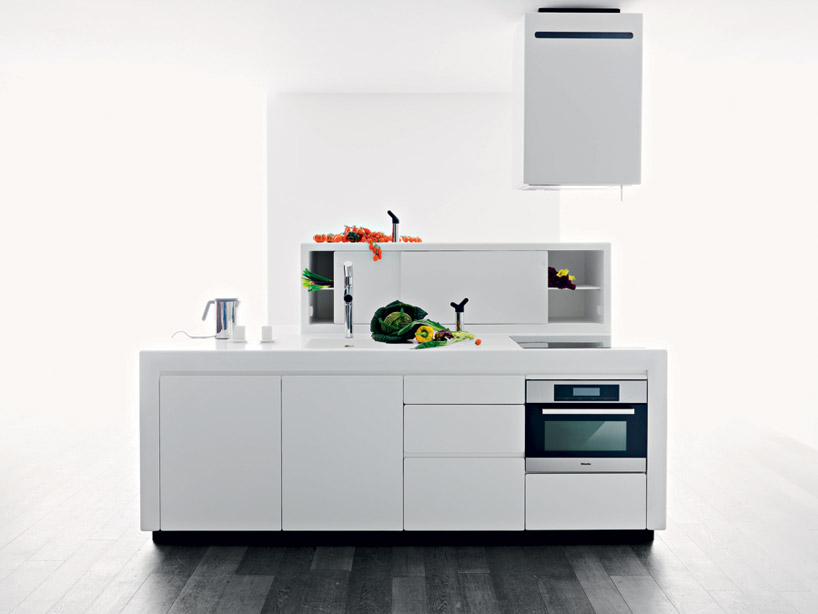 Dutch architect Wiel Arets has collaborated with Italian company Alessi and Valcucine to create Lacucina Alessi. made entirely from glacier white Corian®. The freestanding piece has a unified appearance as the flush lower cabinets merge into the wrapped rounded counter top and integrated sink, all of which is held together by a hidden joint system. 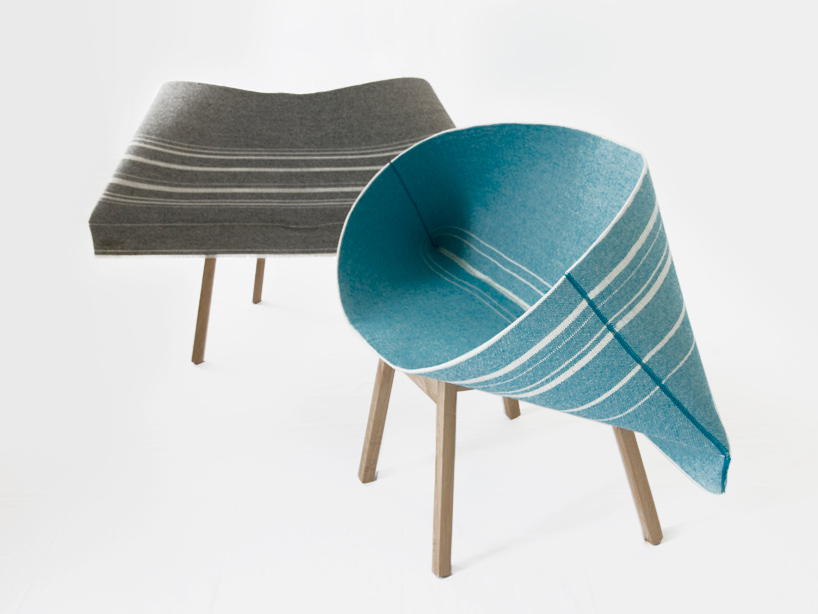 My fabric mavens, you’ll love the special exhibition at Jil Sander. The special Kvadrat Hallingdal 65 exposition is curated by Tord Boontje among other notable designers and it features the works of 32 designers who have all re-interpreted the Hallingdal 65 in new contemporary ways. Hallingdal was the first fabric produced by Danish textile manufacturer Kvadrat. Designed by Nanna Ditzel in 1965, it has been updated with new colors as the Hallingdal 65. 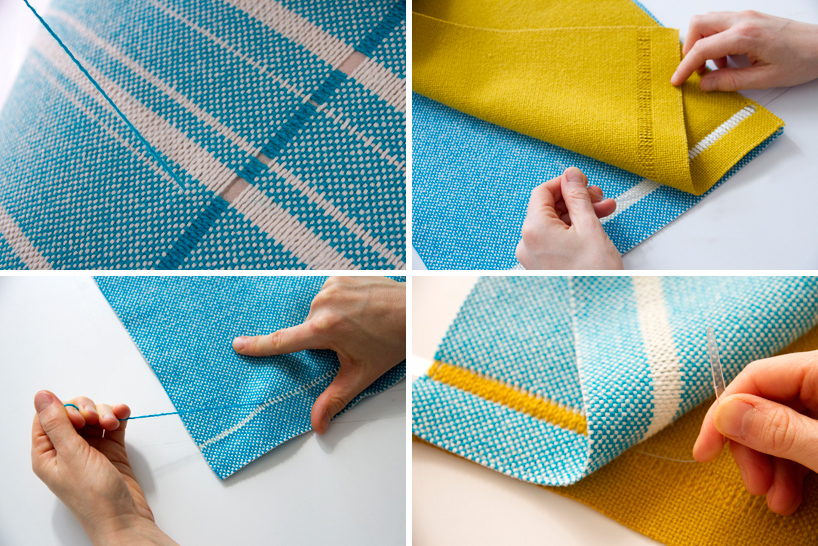 London-based design studio raw-edges (yael mer and shay alkalay) project Selvedge derives its name from the typically discarded selvages of fabric. Using the linear elements of the ‘Hallingdal 65’, they stretch it to dictate the form and structure of an armchair, emphasized by these ‘unraveling parts’- warp and weft threads. They then pulled out warp threads to create a hollow sleeve and then placed two layers in different colors on top of each other and joined them together using a transparent strip.
The result is a colorful rim which appears from the exterior, reminiscent of the selvedge that is found at the hem of raw fabrics. 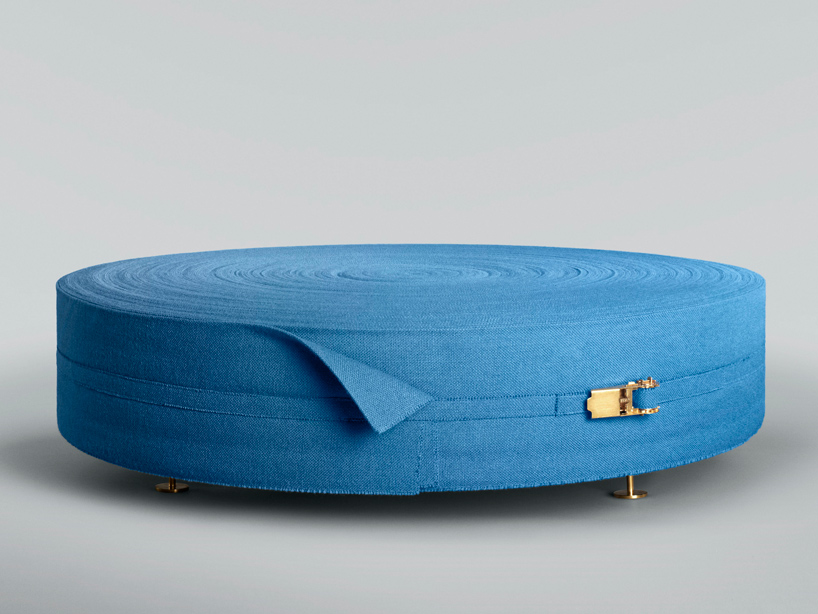 Another approach London-based designer Frederickson Stallard’s ‘Hallingdal table’. Using the fabric as a construction material, rather than solely for aesthetics, the table  explores the possibilities of achieving structure from a soft wool fabric, using nothing but the textile itself as the main building block.

To Over the Top: 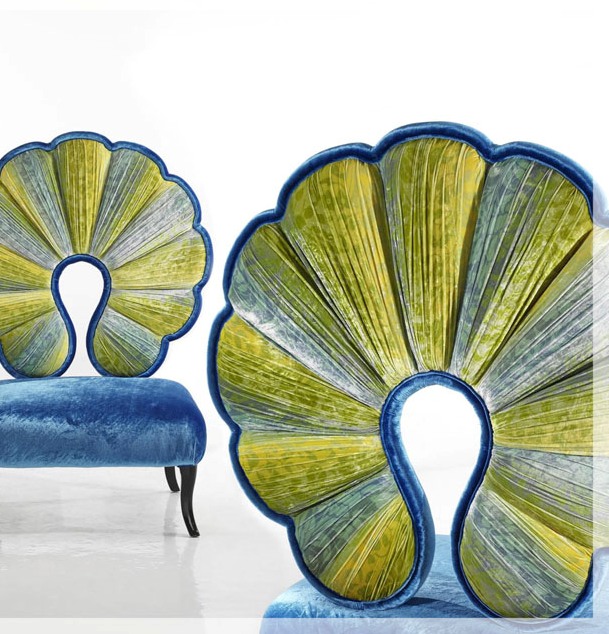 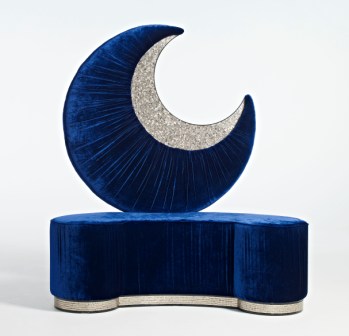