My mom and grandmothers passed on their passion for the art of gracious living to me. They introduced me to the decorative and home arts early; teaching me to sew, rosemale and to knit and embroider.  I have a healthy respect for the crafts, but I am incomplete  awe of these embroidery pieces.  The world of craft and art merge into some spectacular needlework. I covet them all and I admit I have embroidery envy!

I am blown away with these embroidery installations.  Toronto textile artist, Amanda McCavour moved from drawing fibers and cloth, to actually using them to make her work. Thinking that it would be even more interesting to make a drawing out of thread that might exist in air, she started to experiment with water soluable fabric. It turned out to be the perfect tool. 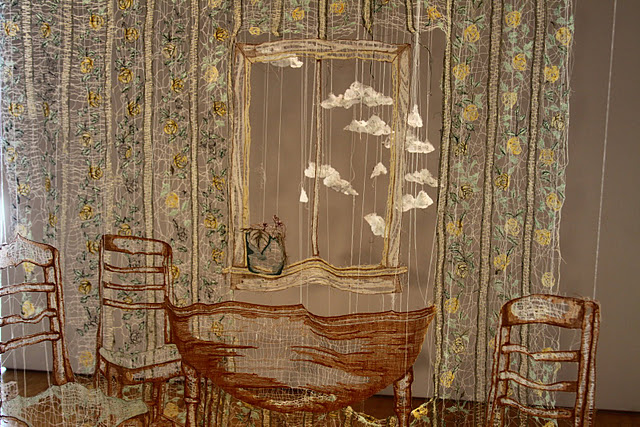 Drawing on her memories of  an old apartment, the life size installation, Stand in For Home allowed her to re-visit, remember and re-create a space that was once called home. 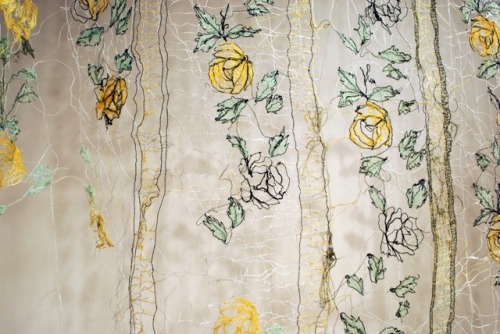 Amanda draws out her images on the fabric before sewing; drawing the outline and then blocking  in areas that will be different colors of thread.  She treats the embroidery like a drawing, moving from light to dark, like shading with thread.  McCavour sews with a sewing machine on the water soluble fabric.  Sewing so close together so that the thread image begins to hold itself together; she dissolves the base, leaving just the thread image behind. 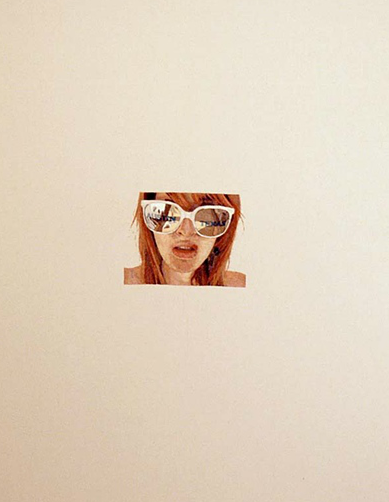 Massachusetts artist Daniel Kornrumpf uses embroidery as a medium for his portraits. Making it even more out-of-the box, he does portraits of people he doesn’t know, but have posted photos of themselves online. 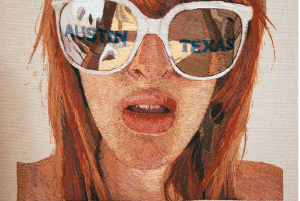 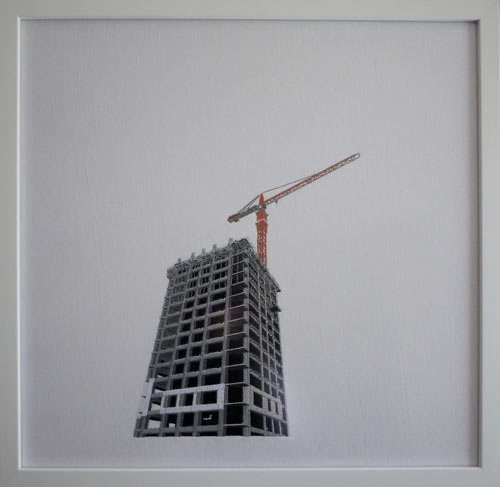 Photographer, artist and graphic designer Michelle Ann Matthews is clearly multi-talented. A photographer that has become intrigued by the mundane and anonymous spaces in the landscape she started photographing the “negative utopia” of the urban landscape- the  in between places, that beckon to the past and the future. 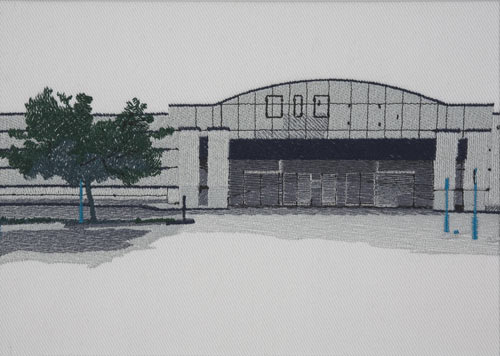 Recently, she became equally enamored with embroidery and its relationship to photography which has resulted in an embroidery series of her photos she titles Urban Fabric.

“ I am intrigued by embroidery’s relationship to human culture, while also looking at a way to change our reading of photography by rendering a photograph into a tactile object.” 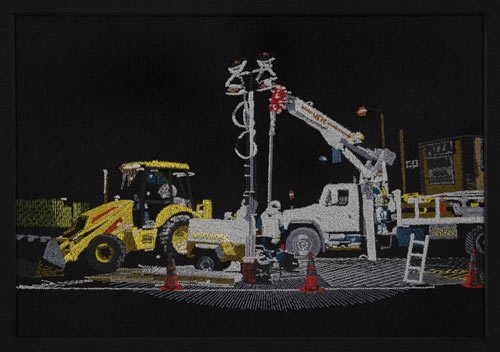 Works in the embroidery series feature snapshots of night construction, a stack of crates at a building site, , a park by the  freeway and an abandoned Kmart.

At first from a distance these works read as photographs. It is only when you look closely do you see the thread. The Urban Fabric   materialize in tens of thousands of stitches, and the thread replaces the photographic pixel. 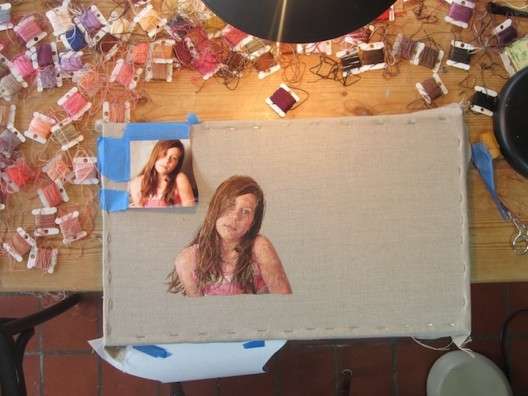 Cayce’s work is a nod to the tradition of tapestry and her love of craft. Using wool yarn instead of oils, Zavaglia creates a dialogue between portraiture and process as well as proposing a new definition for the word “painting”.  Although the medium is crewel embroidery wool, the technique borrows more from the worlds of drawing and painting. 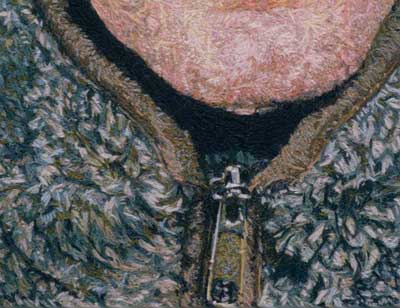 Cayce explains her technique: “Initially, working with an established range of wool colors proved frustrating. Unlike painting, I was unable to mix the colors by hand. Progressively, I created a system of sewing the threads in a sequence that would ultimately give the allusion of a certain color or tone. The direction in which the threads were sewn had to mimic the way lines are layered in a drawing to give the allusion of depth, volume, and form. Over time the stitches have become tighter and more complex, but ultimately more evocative of flesh, hair, and cloth.”