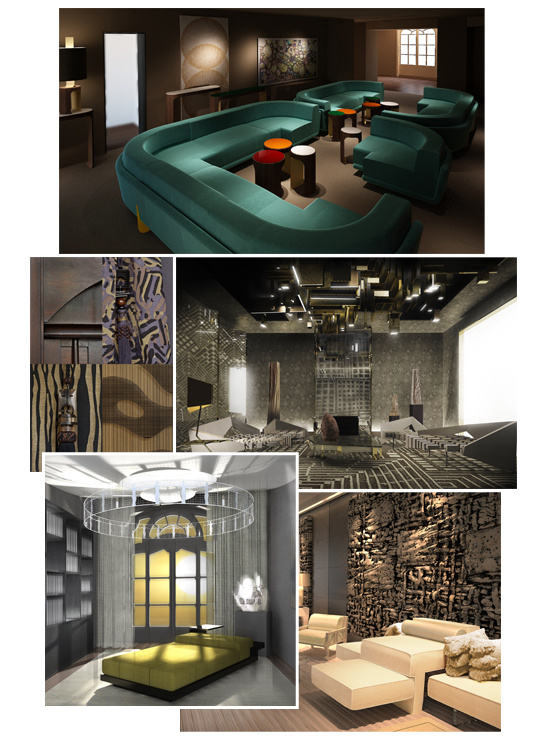 While in Paris last month,  I had the pleasure of previewing  the Architectural Digest Interieurs Showcase.  The showhouse concept is different in France than in the States. My French design friends tell me it is a relatively new concept; not typically done for a charitable event and  the designers work with a theme to develop a more conceptual space. The rooms this year are the result of the designer’s interpretation of the theme and  individual freestanding (and stunning!) vignettes. Artcurial, an auction house and exhibition space off the Champs Elysee was the site of  this year’s  AD Interieurs  where  thirteen  designers transformed   rooms around the theme “Imaginary Voyages.” I have to say, each of the rooms truly transported you on a new journey. The rooms weren’t about ideas, new  products or color schemes, but  challenged you to suspend disbelief. The best way to explain it is  to  is to take you on a virtual tour of this fabulous exhibit.

Interior architect, designer and antique expert, Chahan Minassian, the Lebanon-born Armenian based in Paris is one of the first of in his industry to promote the work of American interior designers, on display on the rue de Lille in Paris.

The Room. Renowned for mixing subtle tones and shades with atmospheric design, Chahan Minassian explores different textures mixed with bold stylistic arrangements, all displayed in front of Peter Lane’s stunning ceramic statement wall. The room also houses a multitasking sofa by Vladimir Kagan and chairs by John Dickinson, the tables were designed by Karl Springer. The furniture interacts with a photo of serene clouds by Jack Pierson, setting the scene for a dreamy juxtaposition between reality and fantasy. 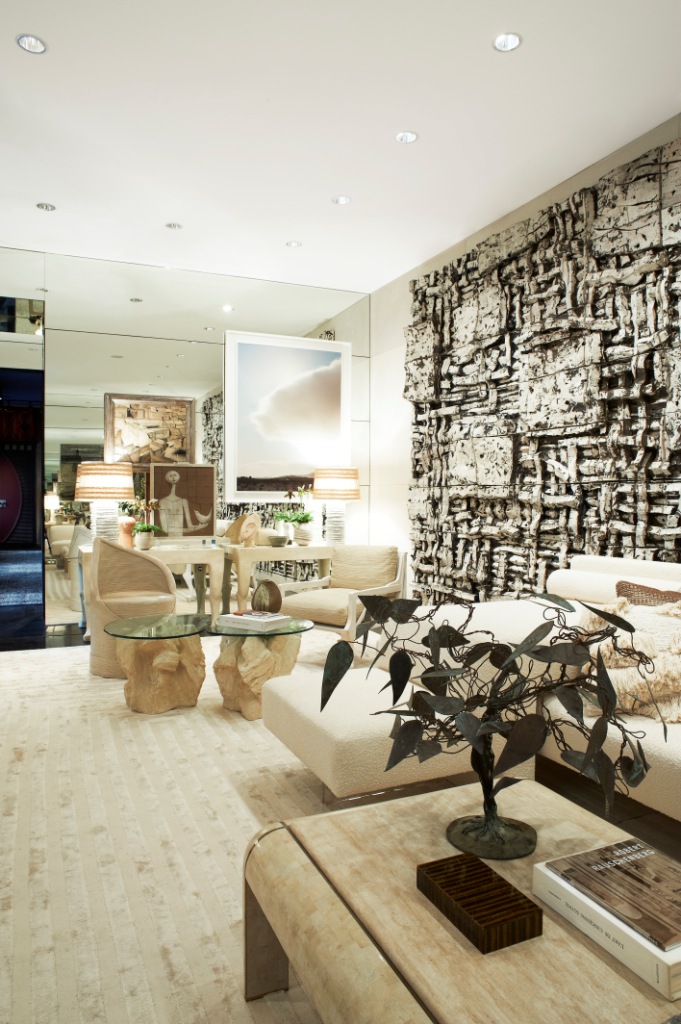 The Room. This spectacular clam-shaped bathtub reminds us of an ethereal floating vessel, surrounded by long glass windows that drift off into the horizon. With chalk-based walls that evoke the sea battered coasts of Greece, Bruno Moinard adds an element of mythology, calling upon the fountain of youth, where Isis and Aphrodite were born. Inspired by Greek gods and goddesses, Bruno Moinard plays on ancient tradition with this airy, dream-like bathroom.

Renowned for its refined and luxurious spaces, chic but without snobbery, Bruno Moinard creates his dream worlds  all over the world.   Moinard has designed houses in Casablanca, Toronto, Shanghai, Knokke-le-Zoute, Belgium, as well as floor plans for the luxury floors of the Galeries Lafayette department store in Parisi, not to mention over 340 floor plans for Cartier boutiques throughout the world. 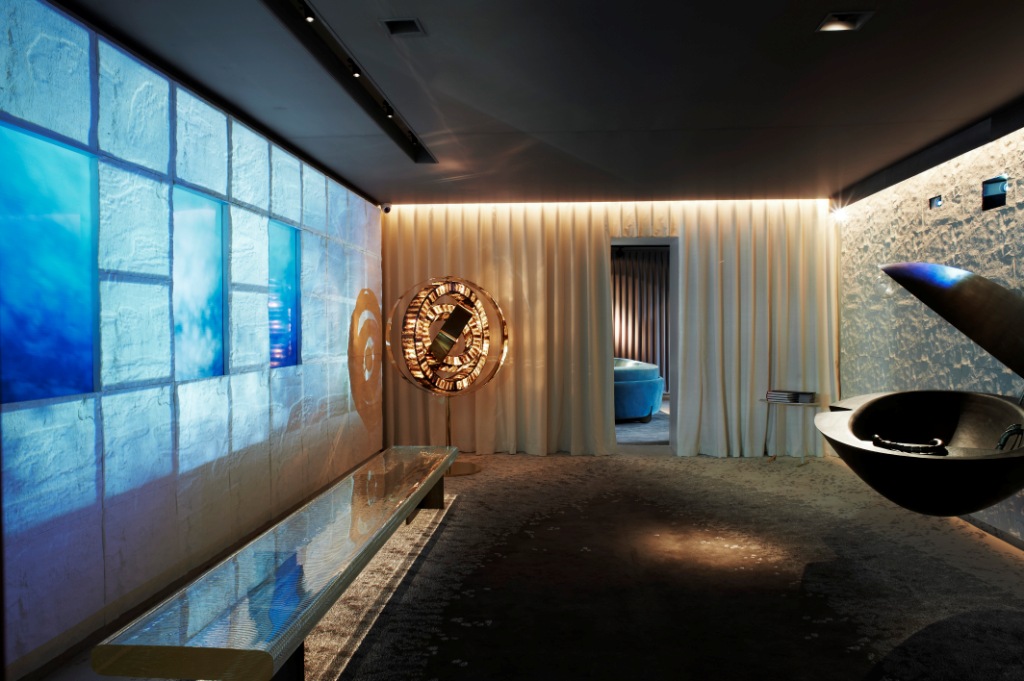 The adobe room by François-Joseph Graf

The Room. François-Joseph Graf erected walls made from red clay to break down and redefine the structures expected to be found in modern architecture. Combining textures with raw images and Olivier Dassault’s abstract tribal relics, as well rusted steel furniture mixed with tribal masks, statues and other primitive ethnographic objects, an African influence is the underlying theme of his project. François-Joseph Graf brings us a stunning spaces of highly graphic interiors, with mismatched yet cohesive furniture and designs. The door portieres resemb;led arican robes with geometric  leading  edges  that faded  into strong graphic  embroidery.  The  shutters were an amazing mix  of tortoise, rope and woods.

François-Joseph Graf is known for his refined knowledge of restricted archeological sites and historical monuments from antiquity, his agency opened no less than five stands at the Biennale antique market. With large works in progress in London, Athens, Rome and Paris, the interior designer is also designing a line of exceptional furniture, which will be revealed in Paris over the coming months. 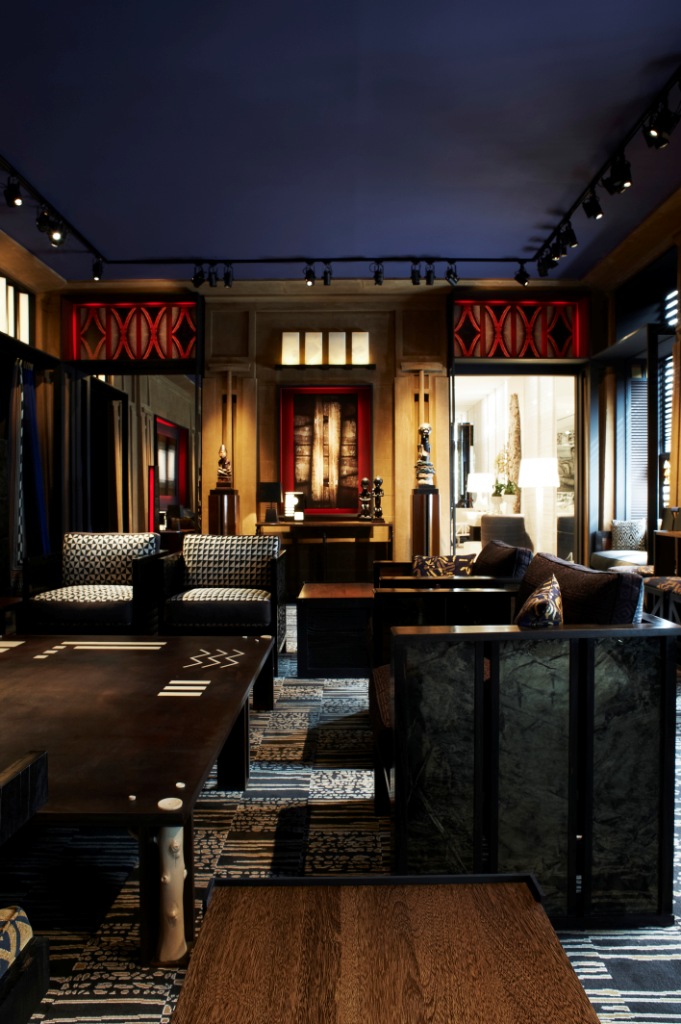 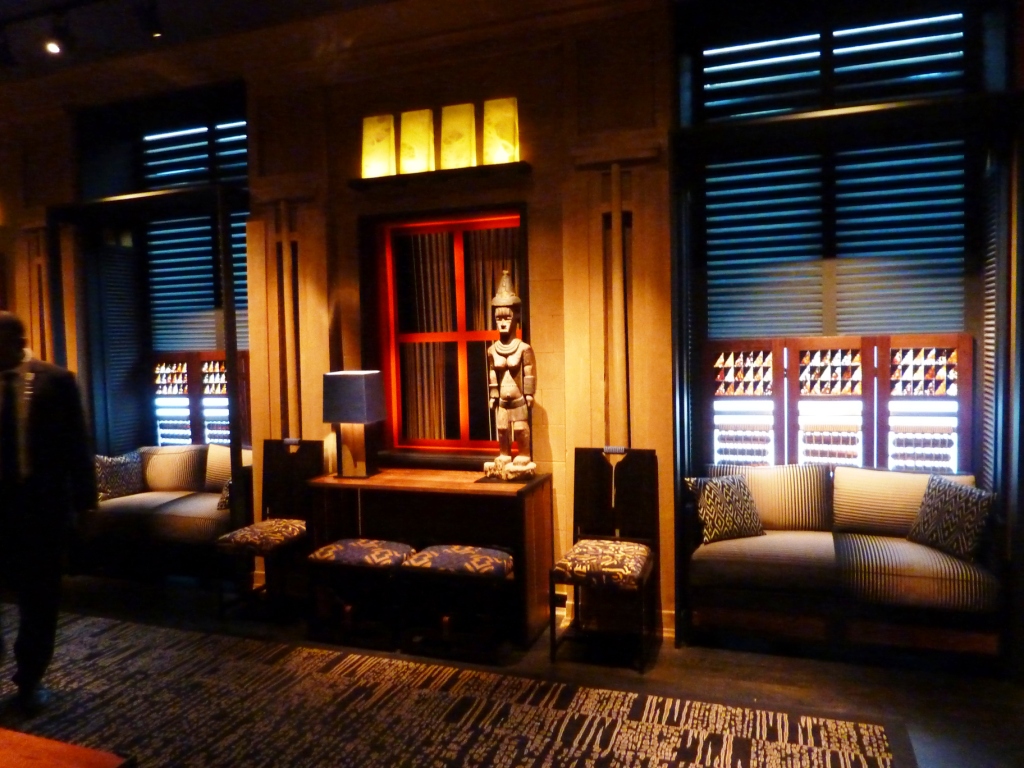 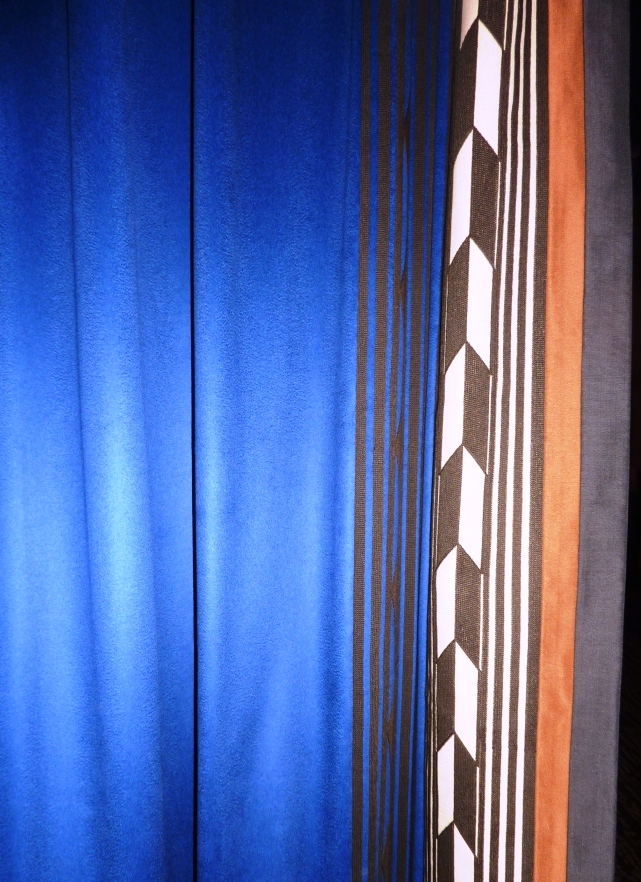 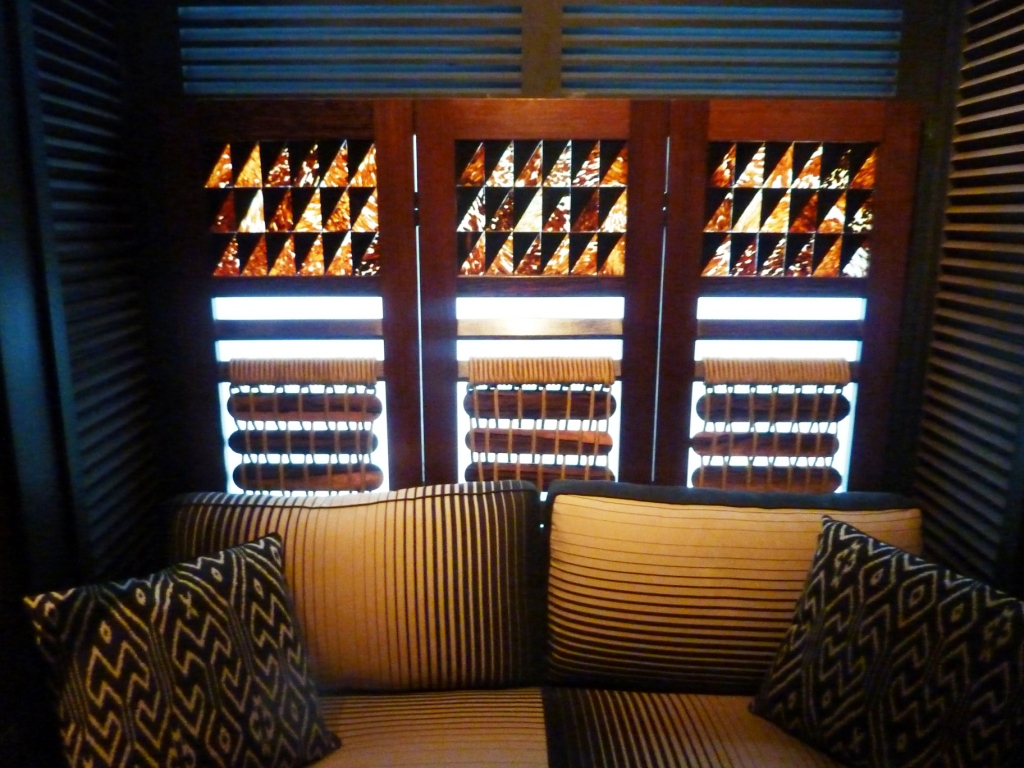 The room. With the bath, floors and walls in pure Calcutta marble, marked with accents of ebony wood, full crowned-molding running along the ceilings and a maze of bronze and white golden shower times, this bathroom gleams in the most luxurious of materials. With Jacques-Emile Ruhlmann and Raymond Subes’ bronze columns, Serge Roche’s vases and Poillerat Gilbert’s wrought iron tables, this room showcases French luxury and savoir-faire at its absolute best. The designer takes us on a quest for perfection, shared in collaboration with none other than Louis Vuitton and Joseph Dirand.

Joseph Dirand often pools inspiration from the classical architecture of the 18th century all the way up to the 1940s. Whether working on residential projects in Paris, London, New York City, Tel Aviv or Cairo, he often draws upon historical designs for his prestigious clients and projects. 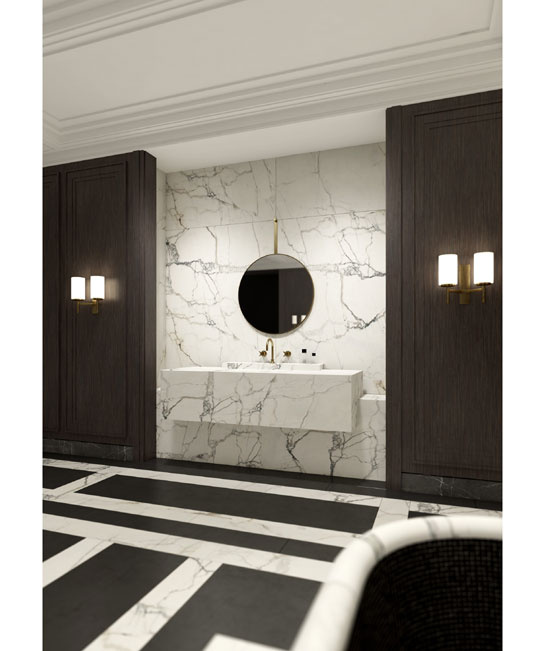 The Room. With a giant folding screen for a door, the graphic and colorful windows and fireplace set the tone of this intimate, baroque-inspired boudoir. With drawings and optical illusions etched into the woodwork, shades of earthy green, rust and tan take us through a fun maze of woven mats on the ground. In a visual feast, the Calder-inspired table is nestled among other cubist-inspired curiosities, selected for their whimsical and visual spirit.

The man to know in Paris and ex-prince of fashion converted into a high voltage interior decorator, Vincent Darré brings us some of the surreal furniture presented in his Parisian gallery. The colorfast dandy first made himself known in celebrity nightclubs, and his talented and whimsical touch did not gone unnoticed, as his list of celebrity clients continues to grow. 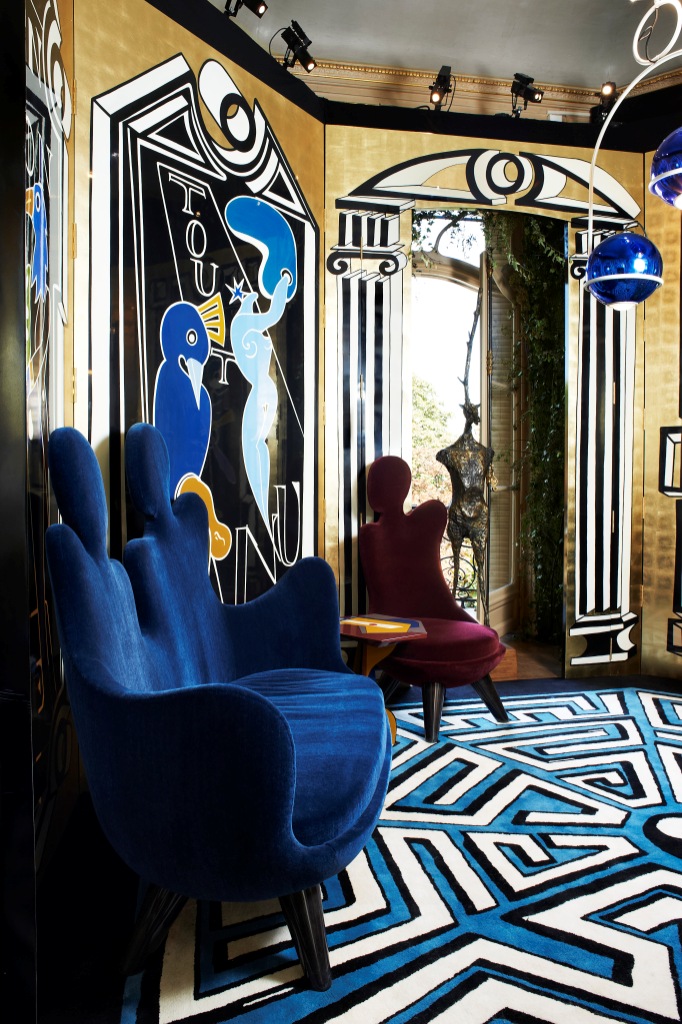 The Room. Jean-Louis Deniot often takes his public on an ethnographic ride, favoring African designs and fabrics. With small tapestries on the walls, he likes to cover the floor in graphic carpets. With rugs as the room’s pattern-based focal point, he places an ultra modern couch comprised of 15 separate pieces against the walls. Hanging from the ceiling is a full mosaic of lights fitting together like a mismatched puzzle, bringing together a space that is rich in optical illusions.( That would also be an ingenious way to hide HVAC runs.) The Curtain panel embroidered by Jean Louis Lesage was an exuberant  mix of thread, beads and textiles.

Jean-Louis Deniot’s  talent for marrying a re-visited French classic interior with the comforts and practicality of American architecture brought him immediate international attention. His talent lies in mixing different furniture onto a silky smooth backdrop. 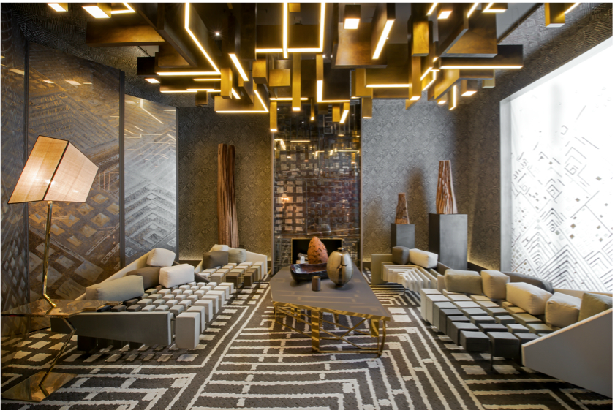 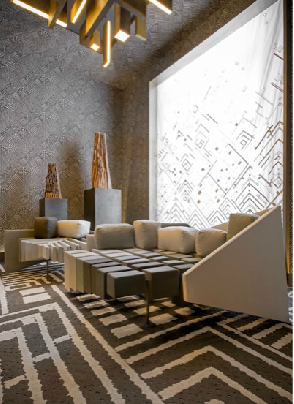 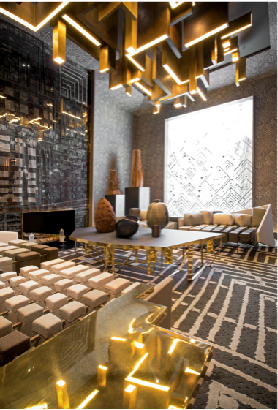 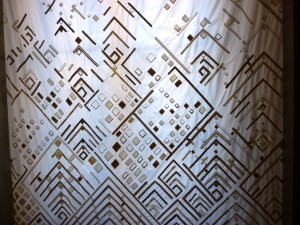 The Room: Rose Anne Pamelonne has created two complementary rooms. Entering the first behind a hidden Chinese door, you step straight into a Winter garden, with walls covered in asymmetric trellis. The embrodered draperies set the tone. The second is more mineral, papered with metallic wallpaper and featuring a mirrored screen. The same pearly white color palette and stunning designer pieces like the Max Ingrand lights, and mirrors by Line Vautrin and Hervé Van der Straeten bring these two dreamy spaces together.

Parisian Rose Anne de Pampelonne brings a breath of fresh air to the French interiors scene, with her Philippino roots, an ethnic-baroque style, and an eye for detail which also comes into play in the fashion accessories collection she designs alongside her interior design projects. Her fancy frescos, and folk touches add a splash of colors to her spaces. 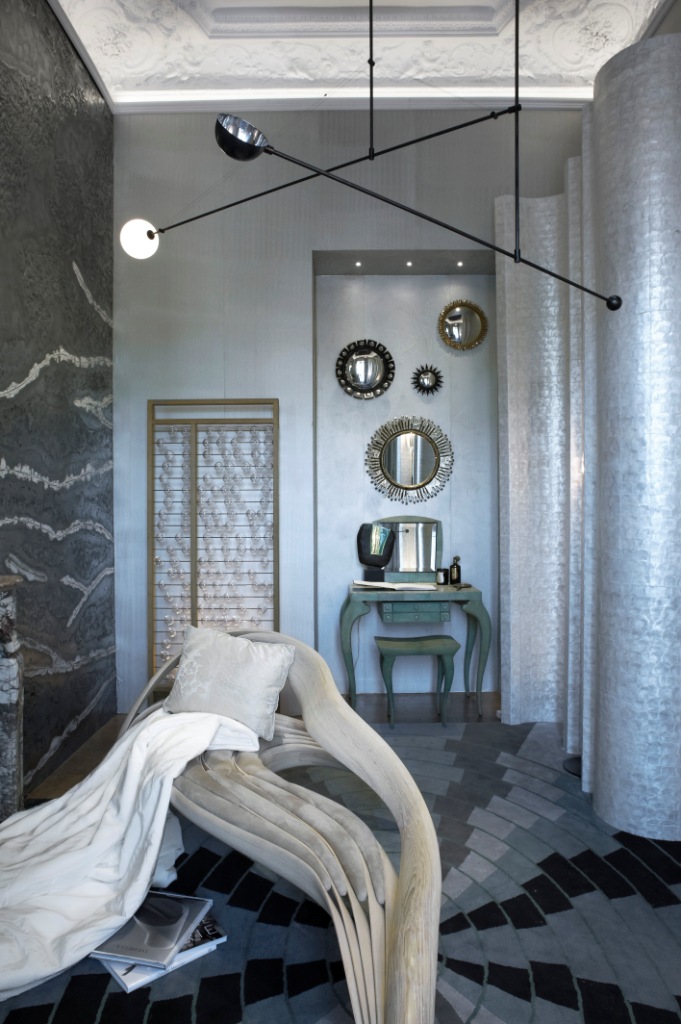 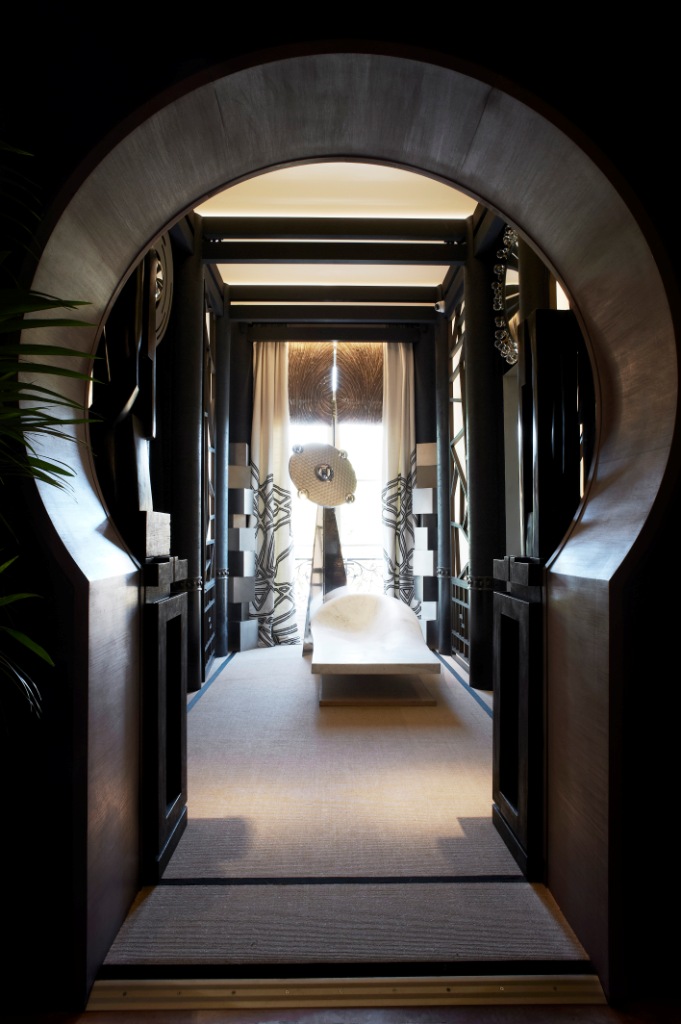 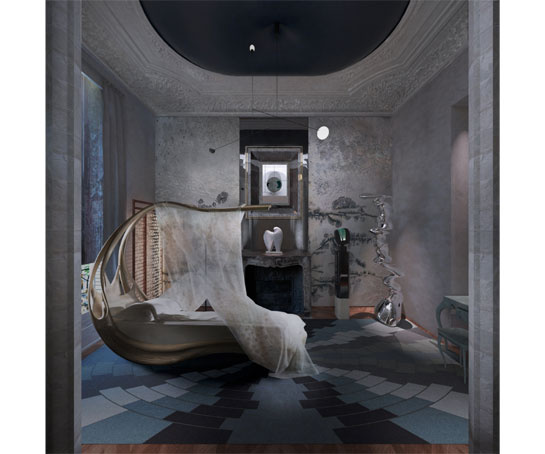