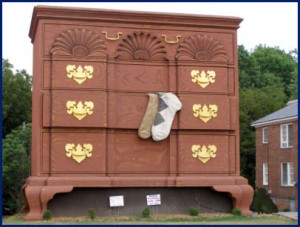 With High Point beginning today, my mind wanders from what will the new collections look like to can my customers afford them?   More news this week from a range of sectors indicate that commodity prices continue to soar .  Steelcase and Herman Miller announced price increases to offset lower margins and inflationary commodity costs.  So how will  furniture manufacturers at HP deal with commodity shortages, and increases?  We’ll be at KBIS and Vision11 later in the month for a firsthand view of how that sector will handle the commodity chaos.

Furniture Today gives a hint of what’s to come.

HIGH POINT – Everyone’s least favorite topic – price increases – will be in the spotlight this week as soaring raw materials costs have forced most case goods, upholstery and bedding resources to hike prices on at least a portion of their line. Producers say they don’t like it. And retailers say they like it even less. But significant cost increases on everything from the steel used in recliner mechanisms to the glass used in curio cabinets have left producers with little choice.

“I am taking as much as I can bear and then passing some along,” said Page Wilson, president of case goods and occasional resource Pulaski. “Nobody likes it, but for the most part, everybody understands it.” Most of the price increases are in the 3% to 5% range, but vary widely depending on the product.

Upholstery and bedding resources, for example, have been hammered by multiple increases in the price of foam, while upholstery producers have also seen increases in the cost of fabric and fiber – especially materials coming from China.”The price increases from China have just been insane,” said Chuck Tidwell, vice president of merchandising and product development at upholstery producer Franklin. “We’re trying to absorb as much as we can, but some of it has to be passed on.”

Stein World President Richard Olmeda said China is facing inflationary pressures due to increased domestic consumption, and spot labor shortages caused by migrant workers who have job opportunities in other high-tech industries.What’s unusual is that upward pressure is occurring during a period of low demand. It’s typically seen during periods of higher demand, he said.”Everything in China seems to be going up,” added Ray Steele, co-founder of Gail’s Accents. “It’s 2% here, 3% there.” Steele said his company hasn’t raised prices – yet – because container shipping costs have gone down in recent months. However, neither Steele nor anyone else ruled increases out entirely.

I have seen it trickling down into my business in the last month as new sample books arrive in the studio. One caught my eye for its’  amazing large scaled embroideries on a cotton ground, but priced at $99 a yard; I will see customer sticker shock.  So who or what’s to blame?

Mother Nature- Bad weather around the world has wiped out crops and herds. We’ve talked about cotton prices, leather hides, wool and cashmere. Now we have the catastrophe in Japan( known for their innovation in textiles and polyesters. )It’s no surprise sheets and towels have become more expensive.

Cautious Industry- The American home décor industry is notorious for importing goods from Asia, primarily China. Yet the rising cost of imports has put producers in a quandary. Returning to domestic manufacturing isn’t an option. Many domestic producers are now looking to Vietnam and Thailand.  Same story, second verse.

Rising energy costs- As the last month has told us, increases in the cost of oil impact everything from transportation prices to production of petroleum-based raw materials (polyester).  Decorative accessories made of resin, textiles created from synthetic fibers, and containers traveling by ship or truck will all be impacted.

Shortages – After the initial shock of the economic downturn, retailers and manufacturers got savvy and reduced inventories. Now both finished goods and raw materials are in short supply.  We’ve all had the not so pleasant experience of more backorders, mill drops and end bolts recently created a vicious cycle of reselects, waiting, customer frustration  to  losing the sale……

As an example, domestic supplies of leather hides have shrunk to historic lows.  A recent Wall Street Journal article titled “Leather Costs Hit by Supply Squeeze,”, reported, “U.S. federal data show cattle-hide prices are at their highest level in nearly a decade, jumping 24% in the last year to $82 apiece.”  That leather chair you’ve been craving has become a bit pricier than you anticipated.

China- Underpaid Chinese workers are demanding and getting higher wages and benefits leading to an increase in factory production costs.  Not surprisingly factories then pass the increase along to American importers.  Many workers are also leaving physically demanding jobs in textile or furniture factories and moving to better gigs in technology, creating a shortage of labor.

Bottom line- Buckle your seat belts we’re in for a bumpy ride for the rest of 2011. We’ll need to find new ways to win the customer and capture the sale .   We can no longer sell design and its products on price or price masquerading as “value”   ….Any ideas?